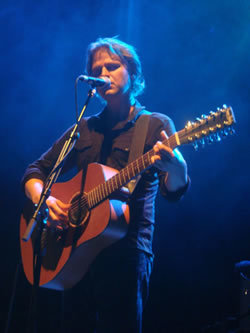 “One broken collar bone, one sprained ankle and a severe case of man-flu – that’s the toll of a three week UK tour” joked Tom McRae as he chatted with the crowd at last night’s tour finale at London’s Shepherds Bush Empire. Taking the audience on a journey through his past three albums and his most recent, King of Cards, he manages to play all the old favourites and a few new ones.

Opening up was the marvellous Steve Reynolds, who had a broken collar bone, done whilst playing football – Tom later commented “I can still hear that crack in my head now… it was horrible!” Clearly in agony, he even so managed to romp through some crowd pleasers and some new material, all of which was absolutely amazing. He managed to restrain himself from berating an incredibly noisy audience, even though he clearly wanted to.

A few minutes later and the guy everyone had been waiting for, Tom McRae comes on stage, explaining that he has man flu, which is apparently a million times worse than a broken collar bone (said jokingly). To warm his voice up, three (presumably) untitled new songs were played before he broke into the better known ones.

In between songs his banter with the audience was amusing as ever, with Tom discussing the Sun’s review of his new album (“They accused me of dumbing down with a “pop” sound that’s “happier” than before… you know things are bad when the Sun says you’re dumbing down. So here’s a happy one from my new album!” before launching into “Got a Suitcase, Got Regrets, perhaps one of the darker songs on the new album ironically.)

Old favourites “My Vampire Heart”, “Walk to Hawaii” and “Dose Me Up” all got airings, greated like old friends. One of the biggest cheers of the night was reserved for when Tom promised to bring the Hotel Café tour back to the UK early next year – one of this Londonista's live music highlights of last year, and a great idea.

However, the best was yet to come. Coming back for his encore, Tom unplugged his guitar, and Ollie the keyboardist grabbed an accordion for a sensational rendition of “Bloodless”, with Tom singing without any amplification, and audience sing alongs galore. It was short and to the point, but decidedly poignant with everyone singing and the full meaning of the song just hitting everyone full-on.

When he finished this, there was only one way to go, with the song everyone had been shouting from the start – “Boy With The Bubblegum”. Simple, yet oh so effective, it brought the whole evening to a close in perfect style.

Tom McRae – one of our nation’s best kept secrets?

Photo from the author's personal collection