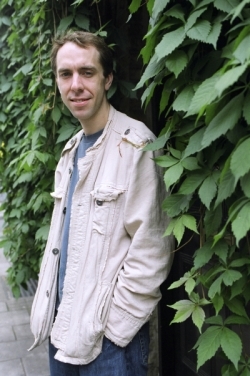 Londonist was much struck by the documentary Taking Liberties and got in touch with director Chris Atkins to find out more. Is it really just motivated by a personal hatred of New Labour? Why do they want to ASBO John Reid? And what's this about rolling full-tilt into a group of rozzers while stuffed inside a bin?! Read on to find out more ...

What prompted you to make Taking Liberties?

I woke up one day and read that a woman had been arrested for reading out the names of the dead outside Downing Street and I thought that it was preposterous that this could happen in a democracy. Also I knew David Bermingham (one of the Natwest Three) through a friend, and it seemed absurd that he was being extradited without a shred of evidence being shown in a British court. Once I started following these stories we realised they were just the tip of the iceberg and it all flowed from there.

Playing devil's advocate here, isn't it all rather apocalyptic? Britain has a strong tradition of civil liberties - one government can't change all that, surely?

It's true that we don't pull punches in the film and the aim is to show people what's at the bottom of the slippery slope we are starting to go down. We've got some stick for bringing the Nazis into the story, but we aren't making a direct comparison, we're just showing people what's the worst that can happen when your liberties are taken. You're right in that Britain has a strong tradition of civil liberties, and that's why it so sad that we are chipping away at every single one of them. Bear in mind it's not just one government - Tony Blair has done two and a half terms in office and that's enough time to cause plenty of damage.

You're planning to issue John Reid with an ASBO, we hear. More details?

The idea is to highlight how idiotic the ASBO laws are and how they can be misused to criminalise innocent people. I work in Tower Hamlets and a lot of people in the community have become increasingly alarmed and distressed by John Reid's behaviour over the last year, especially some of his inflammatory rantings in the right wing press. We went to the Home Office website and it says that if an individual is causing alarm and distress in your community, then you should work with the council and collect signatures from residents and apply for an ASBO - which is exactly what we're doing. We've already got several hundred signatures and when we get 1,000 we'll put the application in.

What was the funniest thing that happened while filming?

The Mass Lone demos. Mark Thomas had an idea to get a few people to apply for a SOCPA permit to protest all at the same time. We thought we'd get a dozen or so people, but then 150 application waving protesters turn up simultaneously and we ground Charing Cross police station to a standstill. One woman iced her form on a cake and a medium turned up claiming she was possessed by the spirit of Winston Churchill - it was chaos. Mark was on brilliant form - he really is a national treasure.

What was the scariest thing that happened while filming?

We met Geoff Hoon to ask him if he wanted to be in the film. He refused but we got into a protracted argument about rendition flights. It was then that I realised that we had let a bunch of lawyers run the country and that terrified me.

The film seems to put the blame for the erosion of liberties in the UK squarely on the shoulders of Blair and his cronies. Does this mean pre-May 1st 1997 we lived in a civil liberties nirvana? Would a Tory government not have behaved exactly the same way post-9/11?

Agreed that it's a bit simplistic to say that everything was peachy until Blair came along, and 10 years further on we're suddenly a police state - the picture is much more complicated than that. That's why it was great to be able to write the book of Taking Liberties alongside the film, which enables us to tell the story in a much more rounded and informative way. One of the main reasons this has happened is that Blair was simply not up to the job of Prime Minister, and just panicked. I'm no fan of the Tories - I grew up in a socialist household - but it's a really interesting question to ask: if the Tories would have taken us to Iraq and overturned our centuries-old freedoms. I think that they would have gone into Iraq , but I doubt that even the Conservatives would have trampled over our liberties so brutally.

What do you think has been the single scariest piece of anti-civil liberty legislation passed by the government in the past few years?

That's a tough one as there are so many! I really think that the current proposals for 90 day detention are terrifying. At the current limit of 28 days it's already the longest in the western world. 90 days pre-charge detention would make us on a par with South African Apartheid where people would get put in jail for 3 months and end up confessing to something that they haven't done. That's what we call a police state and that's what Gordon Brown is proposing.

Are you afraid your details are now on a Home Office hitlist somewhere? Think one day you'll end up stuck in an airport somewhere and not allowed back into the UK ?

Yes, I've booked a flight to the USA in September to go to David Bermingham's trial, and I'm now wondering if should have saved the money and just got a one way ticket. Seriously though, I know we were followed on several occasions, but it would be really foolish of them to do something as we are getting quite a lot of media attention and if they hauled us off the streets it would prove what point we are making. We've already had some terse enquiries from East Sussex Police about the EDO protest story so I'll let you know how that pans out.

There has been a recent trend for thought-provoking documentaries to be viewed online. Will Taking Liberties end up available for download?

Eventually. The whole point of a movie like Taking Liberties is that it works best on the big screen. We have a lot of dazzling animation that looks miles better when it's projected. Also watching the film is an emotional experience that works better if people see it together. We've had several sell out previews and the response in the cinema has been extraordinary -people laugh, cry, gasp and cheer. You can't get that just watching it on a laptop. But you're right a lot of films are now being streamed as an alternative to DVD so I expect that will happen in about a year.

The hate mail is starting to come in - but we've had 100 times as many messages of support. I found it remarkable that Boris Johnson and Tony Benn could agree on something, which I think goes to show that Civil Liberties transcend party politics and are much more important than bickering between left and right.

What would your advice be to Londoners (and others) worried about crumbling civil liberties?

Do something about it! Get off your arse and re-engage with what's happening in Westminster as otherwise they will continue to walk all over us. And for goodness sake vote - millions of people died so that you can have that right and it's shameful how apathetic the nation has become. We've got a website which also can help people channel their anger productively.

What do you think of the War on Terror?

It's a meaningless phrase. How on earth can you have a war against a word? You can have a war against Iraq certainly, but "The War Against Terror" (which tellingly spells TWAT) makes as much sense as declaring a war against custard. It also dignifies what the terrorists are doing when you call it a war - the IRA were always referred to and treated as criminals and that's how we should deal with the current threat.

Devil's advocate time again: After London was attacked on 7/7, surely we need a strong response from law enforcement agencies, backed up by robust anti-terror legislation.

How has the film been received? Any news of prizes, further showings etc.?

So far the reviews have been excellent. We've got 4 stars in

What's your favourite thing about London ?

The variety of life! No two days are the same and I love that about this city. But most of all there is no other city in England where you can get beigels 24 hours a day.

What one piece of advice would you offer to mayor Ken Livingstone?

Sue the Brand Agency that came up with that bloody logo and spend the £400,000 on the district line.

Ideal day/night out in London ?

Ideal day is walking from Soho back to my flat in Rotherhithe along the river on a summers day. I can never get bored of the south bank, and the view and atmosphere around the Tate is unbeatable.

Ideal night generally starts off in The Big Chill and ends up in the Mother Bar dancing badly. I am a Shoreditch twat through and through, but you simply can't beat the energy of this area.

Repeatedly. But my most embarrassing moment in London was on my birthday when my friends forced me into a bin and rolled me down the street into several police. Needed a lot of explaining.