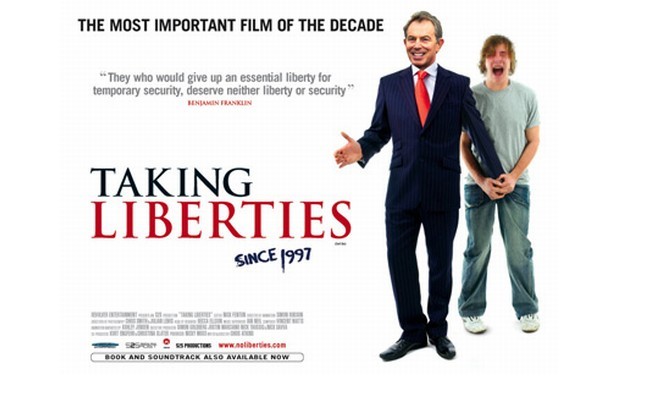 Apologies for the first-person perspective - normal service will resume after this post.

About a year ago, Phil, a friend of mine, had a run-in with the British Transport Police over the use of a four-letter word - "shit" - when describing the accuracy or otherwise of a metal detector set up at Highbury & Islington station. I witnessed the whole thing and wrote about it on Londonist; the story was then picked up by The Register and a variety of blogs and, after it was dugg, the Metro. As well as the interest from print and online media, Phil has been interviewed by the BBC for a forthcoming documentary on the erosion of British civil liberties, and he and I were interviewed for Taking Liberties, a film documentary looking at the rather terrifying erosion of British civil liberties that has taken place since Labour won the 1997 election (watch the trailer).

The shocking truth about the erosion of our fundamental civil liberties by Tony Blair’s government will be exposed this summer in TAKING LIBERTIES, released in UK cinemas by Revolver Entertainment June 8th 2007.

Right to Protest, Right to Freedom of Speech. Right to Privacy. Right not to be detained without charge, Innocent Until Proven Guilty. Prohibition from Torture. TAKING LIBERTIES will reveal how these six central pillars of liberty have been systematically destroyed by New Labour, and the freedoms of the British people stolen from under their noses amidst a climate of fear created by the media and government itself.Luckily (from my camera-shy perspective) we were excluded from the final cut - director Chris Atkins said there was simply too much footage to use, once he'd really got his teeth into the story. Which is pretty worrying when you think about it. Still, we were invited to a showing for interviewees and crew and great fun it was, too. Also present, apart from the talented and resourceful cast and crew, were - among many others - Rachel from North London, and Walter Wolfgang, scourge of Jack Straw's Labour party conference speech and an inspiration to us all.

The film itself was, as anticipated, entertaining and disquieting at the same time - like the in-flight movie in the handcart on the way to Hell. Watching it, I was reminded of the allegory of the frog that is boiled alive as it doesn't realise in time that the water it's in is heating up; the drip-drip-drip of news items about attacks on our hard-won personal freedoms (chronicled in Atkins's excellent filmmaker's blog) is easily lost in the chatter of everyday life, but having the big picture set out in a concentrated burst of fury and noise and personal accounts is a timely reminder of how close to the edge we are. Without wanting to sound like a paranoid, tinfoil hatted nutjob who believes in the proverbial 12-foot tall green lizards, we are living in increasingly straitened times; with a government that likes to lock people up indefinitely even though they have not been convicted of any crime, with a Home Office run (for now) by a dead ringer for the pettifogging, alcoholic and incompetent Colonel Tigh from Battlestar Galactica, we should all be a lot more worried than we currently are.

Taking Liberties buckets along at a frenetic clip, its pace aided by some rather excellent animated sequences and a decent soundtrack, as well as the uniformly informative and entertaining interviews with the likes of Mark Thomas and Henry Porter among many, many others.. There is perhaps some truth to the observation noted on Samizdata about the relentless anti-Blair focus and the "conservative polemic" - small-C conservative, that is, although everyone's favourite Tory Boris Johnson does appear. It's worth asking whether the attacks on civil liberties would have been any different in intensity or number had the Tories retained power in 1997; especially in the post-9/11 era when IDS and company were just as keen as Tony on cracking down on supposed terrists, freedoms and human rights be damned. Still, there isn't much point in debating what-ifs; the fact is that while a Conservative government might have introduced the same draconian legislation as Labour, it was a Labour government which actually carried out the dirty deeds and thus gets to take the blame.

Overall the film paints a depressing picture but is pretty darn good fun to watch; something of a paradox. I highly recommend going to a screening if you possibly can - but then, I would say that. Taking Liberties is a film with an agenda; don't expect any pretense at objectivity here. And damn right too - what justification can there be for tolerating and supporting torture? I'd love to get a straight answer from the government about that. Fat chance.

Taking Liberties is released on June 8, and is being shown at the Ritzy in Brixton, the Renoir in Brunswick Square, the Clapham Picturehouse, the Greenwich Picture House, and the Tricycle Cinema in Kilburn (see here for more details).

There is a special screening next Tuesday June 5 at the Clapham Picturehouse, to be attended by Ken Loach, Shami Chakrabarti of Liberty, David Morrissey - who is one of the film's narrators - and actor/musician Riz Ahmed, as well as director Chris Atkins and Simon Clegg, MP. Tickets available here.

There is a book to accompany the film, available here.