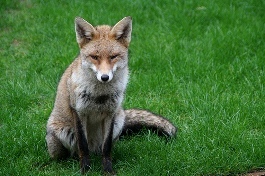 A fox cub found in a garden in Stoneleigh was duped by a Dunlop over the weekend, getting its head stuck in the centre of a tyre. Animal rescue charity Wildlife Aid was called to the scene to free the trapped animal.

Wildlife Aid’s Betty Banning had a top tip to share for members of the public who come upon creatures caught up in objects: for God’s sake, don’t douse the poor things in cooking oil or Fairy washing-up liquid (as apparently some people do)! That doesn’t accomplish much except for pissing the critter off and ruining its fur-do. Always ring the professionals when cast members from All Creatures Great And Small show up in your garden. Well-meaning as you may be, you haven’t been trained in How To Avoid Getting Your Eyes Scratched Out, as they have, so don’t even try it. And with as many as 10,000 foxes roaming the capital, we’d all do well to keep that tip in mind.

After being freed from the tyre, the cub, nicknamed ‘Dunlop’, was taken to a nearby veterinary hospital where its bleeding hind claws and swollen cheeks were treated before being released back into the thorny wilds of suburbia. One can only hope that the little mite didn’t wander into any Royal gardens afterwards or that near escape was all for nought.

We wonder if Mark McGowan, swan-and-corgi-eater extraordinaire, will be eating a tyre in protest.