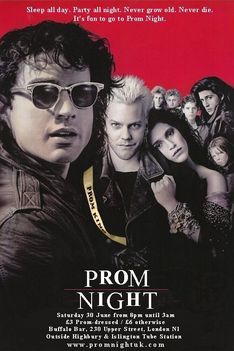 Typically 80s nights can be either a bit naff or full of students singing along to songs they're not old enough to know, but we're happy to come across one that sounds like actual, amazing fun. Prom Night is in town at the Buffalo Bar this Saturday, and as it's the last one in a while, we thought it only fitting to catch up with the boys and girls for their last dance.

When and why did you set Prom Night up?

We made some old fashioned mix tapes for a New Year's Eve party. When we got there, the decks broke down, and there was no CD player, so we had to rely on our tapes. And the crowd went wild!

We decided to do a Prom because we felt we owed it to the UK to give them a proper American High School Prom, just like in the films of the 80s. We had our first Prom Night in May 2001, in time for Prom season.

Who are your djs? What do you do in the real world?

Heather and Duckie are the DJs and promoters. Heather is a knitter and professionial 80s fabulist. Duckie fights crime. Blaine used to be involved, but he spends his days in his secret underground lair.

What type of music do you play, and why is it so special?

We play the best music of the 1980s. The soundtrack to the best days of Molly Ringwald's life. Yes, we're a retro club, but we're inspired by a genuine love of this music. We loathe the irony that is epidemic at other 80s clubs.

What are your crowd like? What's been the most impressive prom outfit you've seen?

The Prom has always been more like a party than a club night. The crowd is always overwhelmingly friendly, and in fact some of our best friends are people we've met at Prom Night. Most people make a real effort to dress up. In particular, we've had one girl, a fashion student, who re-created Madonna's jacket from Desperately Seeking Susan! We've also had a girl who looked just like a Barbie doll! Plus a Michael Jackson, an Adam Ant, etc. You can see photos on our site.

Have you had anyone famous on your dancefloor?

Jenny Colgan, the writer, is a regular. We've had loads of London celebrities, apparently, but we're only told this after the night. As far as we're concerned, the only real celebrities at Prom Night are the King and Queen.

What's your venue like? Where would be your ideal venue?

The Buffalo Bar is great because it's a blank slate that we can turn into a Prom grotto, with balloons, streamers, posters, etc. Our ideal venue would be a High School gym.

What other club nights do you like going to in London?

Shugapush is a burlesque night at Positively 4th Street, which is a beautiful art deco venue, and is a great night for cocktails and dancing. We also love Nashville-on-Thames, a country honky-tonk night at Buffalo Bar.

What are your plans for the future?

We're married now, so I suppose we're at the end credits bit of those 80s films we love so much. We like the fact that Prom Night isn't a regular night, because it makes it more of a special event when we do plan one.

"Boys of Summer" by Don Henley

"Don't You Forget About Me" by Simple Minds

"We Built This City" by Starship

"Pretty in Pink" by the Psychedelic Furs

Prom Night is on this Saturday 30th June from 8pm - 3am at the Buffalo Bar, just next to Highbury & Islington tube. It's £3 in if you're dressed in prom wear or £6 without. Full details at their their website.