By London_Drew Last edited 165 months ago
London_Drew The Book Grocer 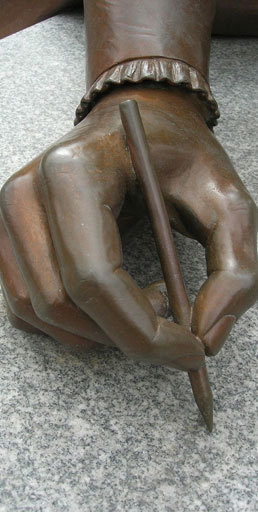 Just out the Van:

Next Monday's From Jane Austen to Catherine Tate: The Rise of the Female Comic Writer brings together a panel, including Shazia Mirza, Marina Lewycka and Stella Duffy, to unpick the funny bone of women's writing - how does it differ from men's writing? Is it funnier, gentler or crueller? Are there universal jokes that women laugh at worldwide? And does it ultimately change anything?

La Langoustine Est Morte, the night dedicated to international, experimental and innovative poetry, fiction and performance is back this weekend - expect an amalgam of forms and energies including Tim Atkins – Poet and senior Lecturer in Creative Writing at The University Of East London and editor of the online poetry magazine onedit.

Try a Bit of This:

When George furiously smashes the head of a stone dragon, he unleashes an ancient power that brings the statues of London to life. Pursued by a pterodactyl which releases itself from the frieze on the museum to give chase, George is hunted through a thrilling adventure full of fabulous creatures who advise, protect and terrify him as he enters their strange and scary world. (Stoneheart by Charlie Fletcher, Age: 10+).

Mr Gum's a nasty old man. He hates children, animals, fun, and every cartoon that has ever been made. And he loves money. So, when he learns about a gingerbread man with electric muscles who is as rich as a mushroom, he is determined to get his hands on the cash ... The question is, can he be stopped? (Mr Gum and the Biscuit Billionaire by Andy Stanton, illustrated by David Tazzyman, Age: 7+).

Little Fearless never gives up hope that one day she'll escape from the City Community Faith School and tell the world the truth about what really goes on behind its high walls. True to her name, she risks all to reach the outside world. But why does no one believe her? And what can she do to bring about change? (Fearless by Tim Lott, Age: 12+).

Three of the eight contenders for this year's Guardian children's fiction prize.

One for Fifty Pence

If you'd like to bring an event to our attention, please email bookgrocer@gmail.com.