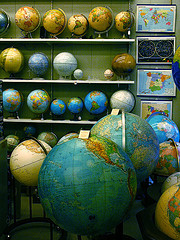 We all know that London is one of the largest, most exciting, cosmopolitan, multi-cultural cities in the world. What other city combines huge amounts of history, taxi drivers who actually know where they're going, a pub every ten metres, fantastic parks for lazy Sundays, and more live theatre and music than you can shake a stick at? None that we can think of. That's why we all live here, after all.

Two London comedians are out to prove London’s international appeal. Seven months ago, comedians Alex Horne and Owen Powell began their mission to find citizens from every country in the world who have chosen to make London their home.

According to the United Nations, there are 192 countries in the world, and Horne and Powell have tracked down citizens of 84 of them, so they're almost halfway there. And apparently, they’re racing two guys doing the same thing in New York. We can't let New York win, can we?

If you're a Londoner and in possession of a passport from Djibouti, Guinea-Bissau or Mozambique (or any one of the other 105 countries they’re still looking for), get in touch via their or MySpace. And tell them Londonist says hi – we’re hoping to interview them in the next few days.