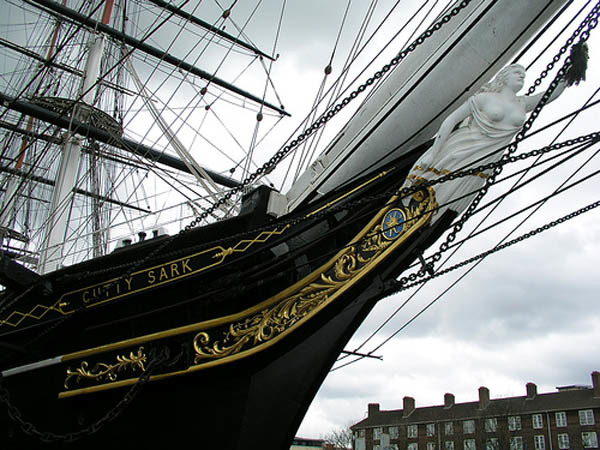 Fire has gutted the Cutty Sark. The blaze is now out, but the famous tea clipper appears to have been reduced to a charred shell. This is a significant loss to London.

The fire started just before 5am. The cause remains unknown, although authorities are treating it as suspicious.

Pictures on BBC news suggest that the prow remains intact, and some sections of the hull may be salvageable. All masts and decking appear to have been lost, however. (Note: these are safely in storage, according to one commenter.)

The 138-year old ship is a key tourist attraction. It is so important to the area that the local light-rail station was christened ‘Cutty Sark for Maritime Greenwich’ – the longest name on the network – so as to reference the ship.

The clipper had been closed to the public for some time, during a £25 million renovation.

The fire will be devastating to the thousands who have devoted time and resources to preserving the vessel. As such, we’ll skip our usual flippancy and irreverence, and make no connections with the other classic ship which has just arrived in the capital.

Console yourself with a non-flammable virtual tour.

Update: It now seems around 50% of the ship was in storage. And despite the ferrocity of the blaze, much of the planking is OK: "There are pockets of charred planking and some have gone, but it doesn't look as bad as first envisaged," Chris Livett, Chairman of Cutty Sark Enterprises told the BBC.