Couldn't Escape If We Wanted To: Helsinki-ist

Helsinki has gone Eurovision bonkers over the past week, in advance of tonight's semi-final.

Helsinki's Esplanadi park has become a European Market for the duration of Eurovision. Participating countries are displaying their culture, tourism and food. 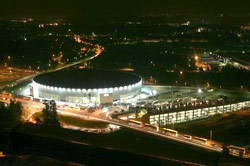 Amazing! The Eurovision semi-final is broadcast tonight on BBC3 at 8pm, with commentary from Paddy O'Connell and Sara Cawood. The grand finale of Eurovision is, as ever, on Saturday night at 8pm.