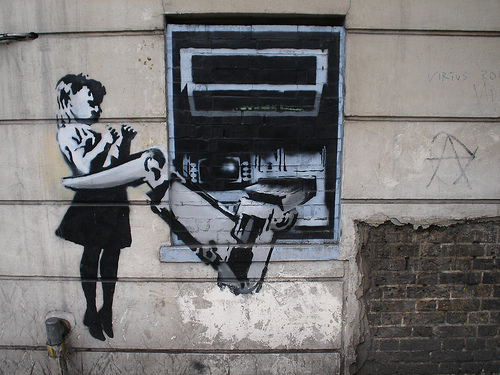 OK, we put our hands up. We're guilty of talking about Banksy far too much, and even making the occasional factual error about his work.

But here's a mega-blooper from the mainstream press.

See this classic Banksy piece from Rosebery Avenue? It's been there for years. Yet several newspapers are proclaiming 'Banksy Strikes Again', including The Times, Metro and the Daily Mail (who have now pulled the story). They're even getting the location wrong, claiming it's on Exmouth Market - when photos clearly show it's the one one Rosebery.

Sounds like some merry little prankster has been manipulating the press – who are hungry for the slightest scrap about the notorious artist.

Image taken from Peter Gaston's Flickr photostream. Thanks to Tom for the tip-off.