By M@ Last edited 184 months ago
M@ Londonist's Back Passage 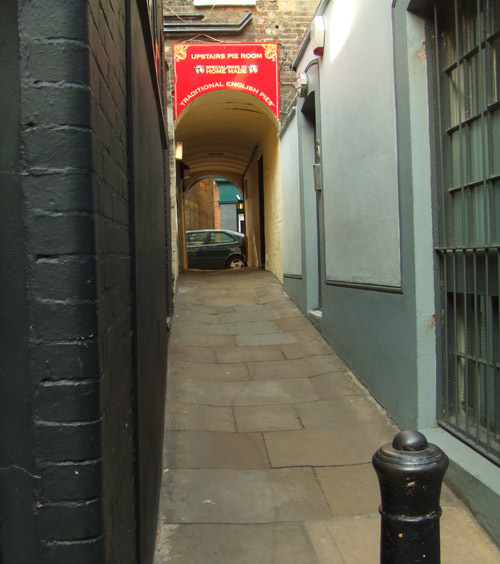 Where? In the heart of Fitzrovia, linking Newman and Rathbone streets.

What? A tripartite affair, with a short cobbled road forming the western and southern stretches, and an alley leading east beneath the Newman Arms' pie room. Newman Passage forms part of the Berners Estate, and dates from 1746. The road stops abruptly to the south, thanks to the post office depot, which altered the street plan in these parts.

Newman Passage is perhaps most famous for its starring role in the film Peeping Tom. In the opening scene, a prostitute picks up a customer in the passage before, being murdered above the pub.

In the late 19th Century Bloomsbury crawled with anarchists, radicals and other political types. Newman Passage housed a co-operative kitchen for communist refugees. Today, the fare is less revolutionary. Above the tiny bar, the Newman Arms restaurant serves naught but pies, in a homely old British way.

Why use? Just smell those pies.

The Way We See It have also visited.

See each and every one of our back passages mapped: