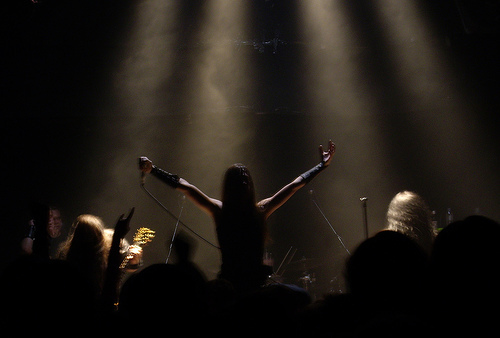 We've been invaded, albeit willingly, by Vikings recently. Ah, that sounds a bit filthy. What we're trying to say is that London-based fans of Viking metal have been particularly well catered for recently, what with Ensiferum the other week and with Amon Amarth last Wednesday at the Islington Academy. Actually, the AA gig was more of a double bill as far as this Londonista was concerned; with Finntroll providing support, for once the non-headline slots were not spent in the queue at the bar.

Female-fronted Norwegian operatic gothic metal band Octavia Sperati were the first support act; we missed the entirety of their set due to, ah, satnav problems – honestly, who expects to find a gig venue inside a shopping centre? – but the consensus from other concert-goers was that they were 'generic' and nothing really special. Finntroll on the other hand were excellent. Playing their inimitable humppa (Finnish polka) tinged folk metal, they were also more brutal than we had anticipated; reports that their new album is heavier than previous outings were borne out by their harder-rocking set.

Finntroll played a range of songs from across their discography, to the delight of the beered-up crowd. Their best-known song Trollhammaren was a particular stand-out – catchier than chicken pox, it's a paean to drinking and living in a forest and being a troll, and the crowd lapped it up. Finntroll played 16 songs altogether, apparently – we weren't keeping count – but even considering that their songs tend towards the shorter end of things, that's still a lot of Finntroll for your money. With all six members' hair windmilling like crazy – nothing beats a spot of synchronised headbanging – the stage resembled a hirsute Holland. The trollish face-paint was an added bonus, really, although with every band member looking like a poster child for Timotei Long, Wild 'n Curly it was hard to discern facial features. 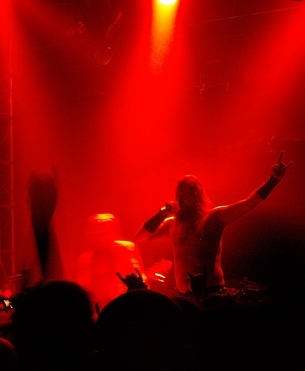 Headliners Amon Amarth are the ultimate dependable Viking death metal band; they have a remarkably consistent back catalogue of good, solid, meat and potatoes metal about Oden and Loki and raiding Irish villages and so on. They may not be the most innovative or imaginative band around but that didn't matter; having been together for years, their live sound is tight and focused, more urgent than on disc and heavy as Thor's hammer.

Lead singer Johan was compelling on-stage, almost a parody of macho masculinity in his bare-chested glory, drinking horn at hand as he exhorted the crowd to chant along. Starting with two songs from their excellent new-ish album With Oden On Our Side, they played all of the songs the fans wanted to hear, and the pit got quite hairy, literally and figuratively. Several gig-goers complained the next day on the event's Last.fm page about the behaviour of some of the fans who thought that barging into people who just wanted to watch in a small venue while covered in sweat and beer was a great idea; ugh. To the short skinny guy with ratty blond hair: We know seeing Amon Amarth is hardly like going to a parish council meeting, but really, there is no need for that kind of aggro.

We felt the sound quality wasn't perhaps the best we'd ever heard, with the vocals coming somewhere further down the mix than we'd have liked. However, this is a minor complaint; even Londonist's gig buddy, an avowed non-fan of death metal vocals, said she thought Amon Amarth "were great – much better and more listenable than I'd expected, and I loved the singer's beard". And what a beard it is too. We'll end this review with a rather distressing anecdote related by a friend: It seems that AA don't make enough money from music to support themselves full-time, so they all have secondary jobs. Johan Hegg – he of the beard – is a metal Viking god throwing beer at the crowd by night, and a … bread delivery man by day. What a thought.

Finntroll are playing at the Electric Ballroom along with Die Apokalyptischen Reiter, After Forever and others on May 10 - ticket info here. More gig photos here.