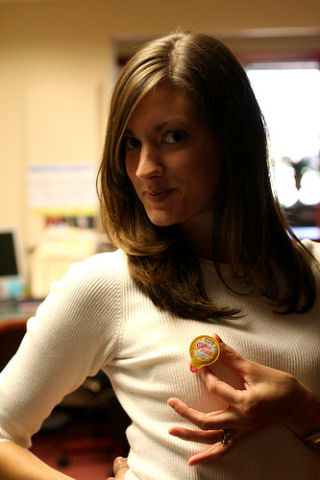 This is our favourite assault on police story ever.

It is alleged she was detained for trying to steal shoes from Lizard, in Hill Street, Richmond. After being arrested for theft she sprayed an officer with milk from her right breast.

There's a 'right tit' joke in there somewhere...

We expect the Standard to start an anti-breast campaign later today. The Sun will of course want to go undercover on this one. The Guardian will send out a small team of journalists to find out just how easy it is to get hold of a breast in London today. The Mail will point out that IF the breast had been filled with radioactive material we'd all be reading this in the morgue. The Telegraph will point out there was no such thing as 'tit crime' under Thatcher. Ken will probably want to slap a congestion charge on larger breasts that take up too much room and the Express will point out that a lot of the kids in our schools are carrying breasts right now.

If any of our readers see suspicious breast activity today PLEASE don't tamper with them. Just take a photo and tag it Londonist so our team of experts can deal with it from a safe distance.