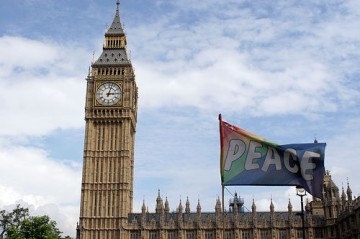 The kind of record-breaking attempt where you balance an egg on your head while performing La Traviata backwards in a vat of custard - Londonist thinks those are pretty lame, on the whole.

The kind of record-breaking attempt where you stand up for free speech in the UK while pointing out the ridiculousness of the paranoid laws introduced by the government which curb the right to protest, however - those are the kind of record-breaking attempts we like to get behind. Just like the one Mark Thomas, righteously angry comedian and Londonist favourite, is organising for next Saturday (April 21), in fact. Mark is trying to organise the UK's largest-ever "mass lone protest" authorised under SOCPA and wants 2,000 individual protests to take place within a kilometre of Parliament Square - but hurry, forms have to be delivered to Charing Cross police station by 10.30am on Sunday 15th.

So far 1761 protests are due to take place - with some people doing just one protest and some following the gruelling schedule of 20 ten-minute protests, with 10 minutes' travelling time in between.

Why is this important? Over to Mark:

THE MADNESS OF SOCPA

So far Maya Evans has been arrested and convicted of ringing a bell and reading out the names of British and Iraqi war dead. This was illegal without permission. Mark Thomas has had to get permission to wear a red nose on Red Nose Day in Parliament Square - as he might have been arrested without permission. A young woman was threatened with arrest for wearing a T shirt with some of Brian Haw's art works printed on them- when she pointed out to the police officer that she was advertising the Tate Britain show by Mark Wallinger the police withdrew the threat of arrest. A man dressed as Charlie Chaplin with a sign saying "Not Aloud" was arrested outside Downing St, he was convicted under the SOCPA law.

If the law is a bad and stupid law then challenge it! The Home Office said "We understand from the Commissioner of the Metropolitan Police that during the period 1 August 2005 to December 2006 1,379 demonstrations have taken place with an authorisation." Already we have given the police over a years worth of demo's in one day. Let's get to 2,000!