Couldn't Escape If We Wanted To: Preview 2

Seven songs down, here are this year's next seven Eurovision semi-final songs!

Moldova's entry, Fight, soars and grinds, with angry guitars that remind us of goth-poppers Evanescence with added synthy lightning strikes and high female vocals. Wind machine, ahoy! The Netherlands send the potential Eurovision classic, On Top of The World. It hits all the right cliches: starts off slow and acoustic, kicks into

a soaring chorus, an odd middle 8 and a huge key change accompanied by squiggly sounds. To top it off, Edsilia, the performer, is a past Eurovision entrant and knows how to work the stage. Brilliant. 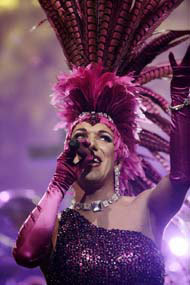 Hear My Plea cry the Albanians with a slow ethnic ballad, the title of which in Albanian is Stone Ballad. That's about as exciting as it gets. Denmark send a fabulous drag queen singing Drama Queen, a fabulously dancey pop song about how fabulous her dramatic life is. Croatia's entry is a fairly dull mid-tempo rock number, sung by a man who will be the oldest entrant in the contest ever. Poland's Jet Set tell us that it's time to party, time to party, time to party in their Black Eyed Peas-esque bouncy, rappy