Couldn't Escape If We Wanted To: Preview 1

Eurovision 2007 is on. Here's the first of Londonist's previews of this year's entries, and there's already some amazing songs. 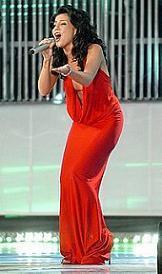 Israel's controversial entry sounds like 5 songs in one. Sounding like a bargain bin Gogol Bordello, Push The Button by Teapacks mixes rap, rock, drum and bass, jaunty pop, klezmer with social messages about nuclear annihilation.The entry form Cyprus is sung by Evridiki who's been taking lessons from Madonna and Anna Vissi. Comme Ci, Comme Ca is a electropop song with vocals in French and full of synths and electric guitar. Has a false-ending middle eight, and should be performed well. Debut nation Georgia send a performer called Sopho (pictured) with a song Bjork would be proud of. Visionary Dream mixes an ethnic tune with thumping dance beats, and floaty string sections all accompanied by shrieky Kate Bush vocals. In the national final, she performed the song wearing a massive floating blob pink dress. Amazing.

More to come on Wednesday...