Can't Get You Out Of My TARDIS 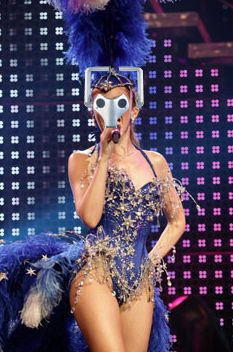 Kylie is set to make her television comeback in Doctor Who:

Kylie Minogue is reportedly set to return to the small screen as a cyberwoman out to snare Dr Who on the British television show's Christmas special. The News of the World said filming would start in July on the Dr Who special which could revive the Australian pop singer's TV career.

An easily recognisable theme tune, dodgy sets, dodgier acting and scripts written on the back of a beer mat. It'll be just like the glory days of Neighbours for Ms Minogue. Plus if she brings a few of her old costumes for David Tennant to slip into, the whole thing can slide into even higher camp mode than it is. At least until Bob Hoskins takes over the role of the Doctor next year.

Ok, we made that bit up, but come on, you'd love to see Hoskins nut a Dalek. Admit it.

Rumour has it that Madonna will follow Kylie's lead and make a guest appearance in season two of ITV's Primeval - a show about hideous reptiles from a bygone age refusing to stay in the past where they belong...

Cheers to Kristian for the heads up.