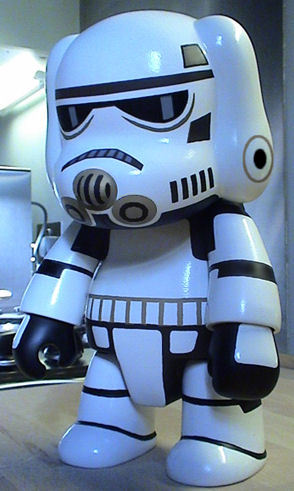 The Times is running this as an exclusive:

Scores of worried parents are buying body armour for their children in a desperate attempt to keep them safe as street violence escalates. A firm that supplies stab- and bullet-proof vests to government agencies around the world has sold 60 jackets, at a cost of between £300 to £425, to concerned parents who have flooded the company with inquiries after several murders of teenagers on London streets. The company has received more than 100 calls from parents in the capital over the past few weeks. The company, VestGuard UK, usually gets one or two calls of this type per year.

We've heard about wrapping kids in cotton wool, but surely Kevlar is a step too far? Not according to worried parents:

“My daughter is being attacked by girls who are much older than her and the problem is continuing. I have never seen them with a knife but you never know when they are going to use a gun or knife until it is too late.

“The vest is very expensive and we do not have a lot of money but I have no choice. My daughter has been attacked five times in a few weeks and I would rather be safe than sorry. “I cannot let my child go out and be killed. I will do anything I can do defend her. She does not like wearing the vest and says it is heavy but I force her to wear it - I said ‘life comes first’.

Lets hope the bad girls don't upgrade their hypothetical weapons to RPGs and Daisy Cutters. Although that would give parents an excuse to buy armoured humvees.

And you can see the fights at home coming a mile off:

Mum: You'll grow into it.

The cheapest new item of 21st century school uniform will stop any knife attack while the higher end will stop a bullet from any handgun or sub-machine gun. Those cheap ones are going to get the piss taken out of them something rotten.

Best not mention that kids can also get stabbed and shot in the face or the school-run will end up looking like a Stormtrooper convention.