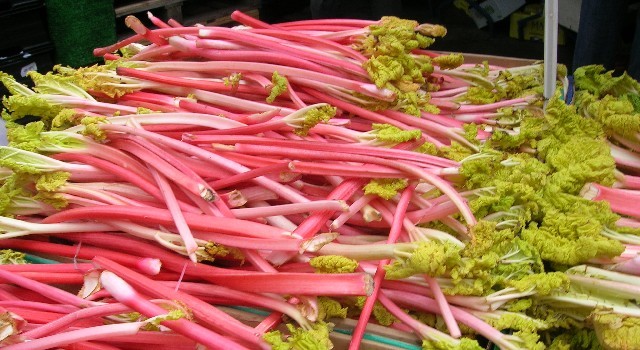 We at Londonist try to cook with seasonal vegetables where possible and a trip to Borough Market early on Saturday (always go early before the gastro-porn tourists arrive, or on a Thursday when many of the stalls are now open) saw us staggering home with armloads of rhubarb. This long, pink creature is one of complexities. It is actually a vegetable yet we choose to use it as a fruit and it’s silky texture when cooked, belies its mouth-puckering tartness if not sweetened. Since at least Mrs Beeton’s days we Brits have used it in puddings yet elsewhere in the world it is used in savoury dishes, such as this Moroccan Lamb & Rhubarb Khoresh (adapted from Waitrose Food Illustrated).

450ml hot stock (preferably lamb but vegetable would be fine)

Heat a good glug of oil in a large casserole and brown the meat all over.

Remove and tip in the onion, cooking until soft and golden. Return the meat to the pan, add the stock, season and bring to the boil. Turn the heat down to a simmer and leave to gently bubble for 30 mins.

Add 3/4 of the herbs and the cinnamon and cook for another 30 minutes.

Stir in the rhubarb and cook gently without the lid for 15 minutes or until the rhubarb is tender (as opposed to a mush).

Stir in the sugar, check the seasoning and add the rest of the herbs before you serve. Serves 4 people.

Rhubarb makes a superb chutney – just fry a sliced onion in oil, add a couple of stems of chopped rhubarb, a glass of red wine, splash of red wine vinegar, a tablespoon of brown sugar and cook hard for around 10 minutes until gooey. Sprinkle over some toasted pine nuts and eat with cheeses or cold meats.

Of course, if you want to take a more traditional approach and eat rhubarb as a dessert, try cooking it with orange-flower water, or with stem ginger and cinnamon to spice it up a little. Just cover in foil and bake at 200 C / gas 6 for around 15 minutes. Heavenly with pillowy meringues or greek yogurt drizzled with honey.