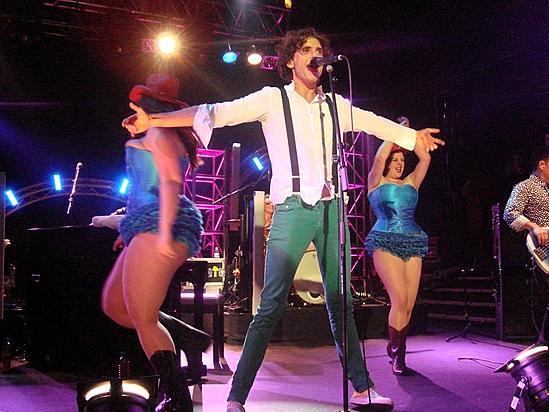 When tipped for the top, many artists can't live up to the hype that has been created for them by the press. Mika, on the other hand is different. Revelling in the limelight, the 23 year old jumped on stage at London's Koko this week to start the first date of his six date UK tour, fully recovered from a bout of flu that cancelled the first date in Brighton on Tuesday.

Support came in the interesting form of Kitty, Daisy and Lewis who are something of a hillbilly Von Trapp family, with Mum and Dad providing backing on double bass and acoustic guitar respectively, and the kids at the front of the band, appearing younger than most of the audience. They muddled their way through their set, clearly nervous at playing to such a large crowd compared to what they're used to, playing just about every instrument possible. In the circumstances they were good, but need to work on getting that much tighter in the future – they seem a bit all over the place, and don't appear to know their way around their instruments particularly well.

Pretty soon 9pm rolled round and sure enough Mika jumped on, launching straight into "Relax", showing that his voice was fully recovered from his flu, and that he was back to full strength. Moving nicely into a jumpy "Love Today", he soon removed his ornate hoody, going down to braces and a dress shirt, joking how he always starts off with so many more clothes than is comfortable.

"Big Girls" came around and he was indeed joined by two, erm, larger, girls for the song, dancing around, popping out of their corsets several times, and generally causing mischief, dancing on his piano stool, and getting in the way of his guitarist. "Ring Ring" is the closest to a ballad Mika has, joined by a superb backing singer and a cellist. Sure enough closer to the set was "Grace Kelly", his current number 1 hit single, sung almost perfectly from the crowd, with Mika clearly touched by the response.

After a short break, Mika comes back to do his bubble-gum hit "Lollipop", a song that Aqua would have been proud of. He's joined by his dancers, the Lollipop girls, who dance, jump, and play with four huge letters that spell out "LOVE". Glitter cannons go off; giant balloons are thrown into the crowd, giving an experience akin to the Flaming Lips at Hammersmith Apollo last summer. With that, Mika walks off, finishing 50 minutes of camp classics that in one album have put him up there with the Scissor Sisters and a modern day Freddie Mercury.

His May tour has almost totally sold out, and he looks likely to be a hit at the festivals this summer, with Glastonbury already confirmed. Watch out for him – he's going to be very infectious over the coming months.

Words and pictures by Phil Singer