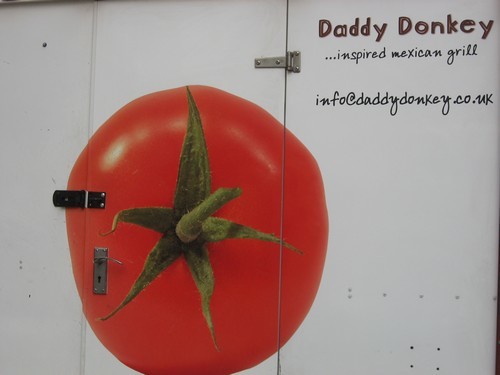 As most Americans (and probably Mexicans) in London will tell you, there aren't enough Mexican joints in town. 27-year-old Joel Henderson, the proprietor of Daddy Donkey on Leather Lane, is trying to change that, one quesadilla at a time. After studying Spanish at Leeds University and with extensive travels in Mexico and the rest of Latin America under his belt, he started up his London-based burrito cart in late 2005 with less than £500 and a dream. He talked to Londonist about his burritos, his business and his plans for London-burrito-domination.

So Joel, tell us how you came up with the idea for a burrito cart?

At first I didn't. When I got the idea for a Mexican burrito company I initially tried it out on a rickety old market barrow. It wasn't until I realised that the idea had legs (donkey legs of course!) that I started thinking about ways of expanding the business within a manageable budget. Although it's obviously good to have ambition and a dream, I felt that any ideas of major retail grandeur needed to be leveled with experience. And this, quite frankly, was experience I clearly didn’t have. A little burrito cart (or burro truck as we like to call it) therefore seemed to be the next logical, manageable step forward. However if only I had known we’d have needed a burro truck double the size only six months later! But oh well, hindsight is a wonderful thing. The main thing is that the business is taking, like I say, those “manageable” steps forward. In fact the newer, larger burro truck we’ve designed will allow us to improve the service we offer our customers. For example, the menu is due to expand and we also hope to launch an office delivery service. A new funky website will also mark the beginning of a fresh, healthy and exciting Daddy Donkey brand image that reflects the importance we place upon preparing our food fresh on the stall everyday, using only natural high quality ingredients.

So watch this space… www.daddydonkey.co.uk.

Who's the typical client? Do you get a lot of Americans? Mexicans? Are they first-timers or experienced connoisseurs of Mexican cuisine?

99% of Daddy Donkey’s customers are young urbanites who work from Monday-Friday in the EC1 area.

Yeah of course, we have quite a number of US customers. The Mexican food industry in the States is equivalent to leading ethnic food sectors such as Indian and Chinese here in the UK. In fact it seems like there’s a burrito shop on every corner in some parts of the US. There is definitely an untapped US audience out there that’s crying out for more good Mexican eateries across the city.

Mexicans, however, are not so common! I think we must have two or three Mexican customers, amongst a few other Latin American and Spanish regulars. One Mexican customer in particular, Jorge, often enjoys eating at Daddy Donkey. In fact he even taught us how to prepare a quesadilla-style burro that is eaten in his home town in northern Mexico. Look out for it on our new menu coming soon… it’s yummy-scrummy!!

I can’t say that we’ve had many connoisseurs of Mexican cuisine. Well not that I know of. However the fact that much of our energy goes into explaining how the idea works would probably indicate that many people are first-timers.

Why do you think there are so few Mexican restaurants in London?

Lack of Mexicans I guess! I’m not sure of exact figures, but having lived in the US for a year one thing is for certain: there’s a hell of a lot of Mexicans inhabitants spread across the entire country. I think the Latin American population here in London totals only a few hundred thousand, where as in the US there are millions of Mexican inhabitants alone.

It’s also cultural I think. Tacos and burritos are for the US what curry is for the British. It’s almost society’s way of embracing and accepting ethnic diversity.

How do you source your ingredients? Is it easy? Is it difficult?

The obvious place to start is with companies or people who work in the same industry. The Cool Chile Company (www.coolchile.co.uk), although they predominantly concentrate on retail, has definitely helped me out. As far as fresh ingredients are concerned that’s were it becomes a little tricky. Understandably it would seem that the lack of Mexican food in the UK means that there’s very little demand for fresh Mexican ingredients. That’s not to say you can’t find fresh Mexican ingredients. I have managed to source fresh tomatillos (a sour green tomato often used in Mexican cuisine for sauces and salsas). However, they’re so extortionately expensive that at the early stages of business it’s just not economically viable to have such an item on your menu. The best way for us has been to adapt the food around the ingredients that can be sourced on a daily basis at the various wholesale markets across London. I believe what’s most important is that the food always remains fresh and tastes great.

Are there any Mexican restaurants in London that you think are doing a particularly fine job?

There are a number of good Mexican restaurants in London. Green & Reds on Bethnal Green Road is a particular favorite of mine, even if the portions are a little on the tapas side. But I’ve always favored quality over quantity. The Beach Burrito Café in Berwick Street was pretty tasty, but due to licensing restrictions the owner seems to have compromised a great deal on taste and theatre. Café Pacifico in Convent Garden was ok, but like Green & Red, it’s a sit down restaurant rather than a ‘fast-fresh’ Mexican burrito concept. I keep meaning to try out Mestizo on Hampstead Road but haven’t quite got round to it yet. And then there’s Daddy Donkey of course… damn tasty if I do say so myself! Not strictly a restaurant as such but we’re getting there.

Any plans for London-burrito-domination? Are there more Daddy Donkey carts in our future?

I’m going to just concentrate on finishing the large burro truck first. The office delivery service will also allow us to increase our customer base considerably I hope. As for future burro trucks… that’s a whole other interview in itself!

Have you noticed any changes in customers and/or tastes since you first started Daddy Donkey?

Spicier the better it would seem. We can’t make enough of our hot salsa nowadays. I’m going to have to start bottling it up and selling on the website!

Where do you eat when you're not eating Mexican?

What’s your favorite thing about London?

That’s a really difficult question. The problem is that I have so many favorite things about London. I love strolling around Borough Market on a Saturday and Spitalfields Market on a Sunday. I love the London parks in the summer and the cozy pubs in the winter. But most of all, I love the fact that dreams really can become a reality if you want it enough.

Don’t become a market trader or any other business person who relies on the operation of trade vehicles inside the congestion zone, for that matter.

You can find Joel and the Daddy Donkey team at Pitch 102 on Mondays through Fridays at Leather Lane Market, between 11:30 a.m. and 2:30 p.m.