London Protest: Down With This Sort Of Thing

By Jo Last edited 160 months ago
Jo London Protest: Down With This Sort Of Thing 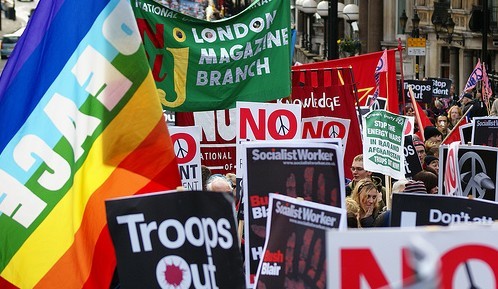 Londonist loves a good protest; they're excellent for the constitution. Nothing like a nice amble all the way from Speaker's Corner to Trafalgar Square with 60,000 (or 2,000, or 100,000, depending on who you listen to) of your fellow Londoners, while carrying an "amusingly" modified placard expressing your outrage about something or other.

Yes, Saturday was Stop Trident/Troops Out Of Iraq/Don't Attack Iran marching day, and so march we did, from that symbolic home of iconoclasts Speakers' Corner to, er, that symbol of Britain's former victories in pursuit of imperialist ideals, Trafalgar Square. The weather could have been better but you can't have everything and then again, it could always have been worse.

Once we had reached our objective, three and a half hours after first assembling, we were treated to a variety of speeches by various luminaries of CND and the Stop The War coalition, as well as Rose Gentle, Mark Thomas - easily the most compelling speech of the afternoon, as he pointed out that naming a nuclear weapons system after the instrument of Satan might not have been the best PR idea ever - and Londonist 'favourite' (ahem) George Galloway, who warned that unless the goverrrrrrnment starrrrted to pay attention to the people of Brrrrritain, therrrrre would be rrrrrrrrrrrrrrrrriots on UK strrrrrrrreets beforrrrrre long. And so on, in his inimitable way.

Called by the Campaign for Nuclear Disarmament, in conjunction with Stop the War Coalition and the British Muslim Initiative, tens of thousands marched in London on 24 February, 2007, to protest against the Trident and against the imperial wars in the Middle East, including Iraq and the looming one on Iran. People were there to express their opposition to militarism, the 'war on terror' and demand justice for Palestine. Scotland for Peace's "Bin the Bomb Roadshow" also ran between 16 and 24 February, culminating in a march and rally on 24 February in Glasgow.

There was a small autonomous block on the demo, but was apparently the focus of most of the policing and 'intelligence gathering' (see this Met leaflet).

The pink samba band and their infectious rhythms

The free and delicious food from the Hare Krishnas

The woman in the CND coat

The guy with the really cool Rage Against The Machine haircut

Counting the many hundreds of keffiyehs worn by marchers

Londonist could have done without:

The hijacking of the day's march by everyone from the Free Palestine lot to the 9/11 conspiracy nutcases, until it wasn't so much a "Stop Trident/Troops Out" march as it was an "Anything anyone in power has done that annoys us and we feel like making a fuss about" march

The policemen taking photos of all the protesters

George Galloway's exhortation to the crowd to text some words to some number in order to buy a single of War - What Is It Good For? (Halliburton's share price?) and send a "strrrrrong message to Tony Blairrrrrrrr and Georrrrrrge Bush" - very Protest 2.0

Anyone else who went, please share your experiences in the comments section!