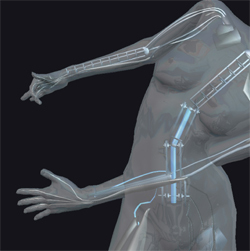 Quartet is a 'digital dance' performance and the culmination of several years’ worth of complex collaborative research. The show features a human dancer, a computer generated avatar dancer, a robotic camera, a live musician, film bits, some hardcore science and a hurdy-gurdy.

This is the work of the Quartet Project and you can read about all the technical scientific spoddery behind it here, but it’s probably sufficient for us to say that these performances seek to explore and create real-time relationships between music, dance, robotics and animation, and challenge the audience’s perception of the sound, movement and bodies before them.

The choreographers include A-list London dance favourites Lea Anderson (Founder and Artistic Director of The Cholmondeleys and The Featherstonehaughs) and Russell Maliphant (currently best known for his work with living legend, Sylvie Guillem and the sublime “Push” – book now!) and will be performed by dancer Carlee Mellow.

Carlee will be hooked up to a motion controlled robot camera which will project a 3D virtual dancer that, in turn, will be influenced by the playing of live music and illustrated by a film of what the camera sees in real time: yes, this may well be psycho-physio-sensory-overload.

It sounds almost stupidly complicated but we’re hoping that the actual experience will be beautiful and absorbing, if not totally bonkers. It’s also an opportunity to have a poke around the glorious Great Hall at Barts and hopefully catch a glimpse of the Hogarth murals.