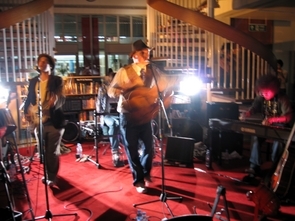 A couple of weeks ago on Friday, the perfect antidote to a certain, unmentionable reality TV showdown was a gig at Swiss Cottage Library, of all places.

For one night only, the aptly named Mr Hudson and the Library, graced the award-winning building as part of a larger tour of book lending institutions. Their hard work is in aid of the "Get it Loud in Libraries"campaign, promoting the ever growing catalogue of CDs available to borrow (but presumably not rip) from UK libraries, enticing young people to pay a visit and thus save all things library from extinction. It was a fine idea getting Mr Hudson and his band on board, as they are about to become very big indeed.

A crowd of about 100 bookish types mull amongst the rows of books in an impressively civilized manner for a gig, and a Friday. Then a library official named Bob, or as he jokes, Mr Library, takes to the ramshackle performance space set up by the horror and sci-fi section, to introduce the band, point out fire exits and suggest mobiles are switched off, "because this is a library after all". The band skulk on, all heads hung bashfully, with the exception of their more extroverted, dandy leader.

What follows is an extraordinary performance. Previewing material from their debut album A Tale of Two Cities, the reggae inflected pop paints smiles across the room. From a moving ditty about a journey on the M6, to the anti-capitalist Bread & Roses and the more dancey Ask the DJ, twice, it’s a highly infectious vibe. Forthcoming singleToo Late Too Late demands some audience participation for its humbling chorus,

"why do i always play the clown" – “you’re all the Library tonight”, Mr Hudson praises. Maybe it’s because we’re standing in a library that it feels a bit like a community music project - whatever, it's the best one that ever existed.

And they look fantastic: Joy Joseph on the steel pan drums and divine backing vocals; Torville Jones, the "piano-forte" ("a good way to get out of the ghetto", comments his maestro), achingly hip with a pair of plastic aviators hanging off his face; Maps Huxley on bass and Wilkie Wilkinson on the electric drums complete the pretty picture. And then there's Mr Hudson, otherwise known as Ben. He's a charmer, poet, joker and crooner, breaking hearts with his drawl on a cover of My Bloody Valentine.

Proceedings are only hampered by a certain shyness both on the part of the band and the crowd, due to premises induced prohibition: there has been no warm up act and the acoustics aren't exactly great. But despite everything, they rock the library.