Commuters Abandoned In The Snow 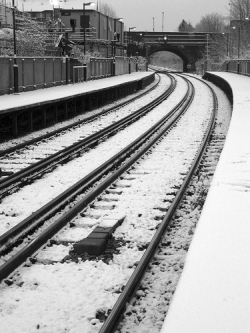 If revolution ever comes to Britain, we reckon it won’t start with the huddled masses of popular socialist imagination; it won’t be workers rising up, casting off their chains and upending the rotten edifice of the UK’s establishment - nothing so old-fashioned. No, revolution will come from one group of downtrodden helots, oppressed daily by their cruel metal gods: the commuters who travel into and out of London. Who’s to say that some day soon, the announcement of the cancellation of the 8.01 to Waterloo won’t spark some platform rebellion which will eventually transform society as we know it? Goodness knows the way commuters are treated by the train operating companies is callous enough to call for an extreme reaction.

Take, for example, this chilling story of incompetence and cruelty:

Then a replacement bus broke down. But the final blow for six sorry passengers came when rail staff jumped in a taxi and abandoned them outside London in the snow.

Where to begin? First there is the small matter that a train ticket is a legally binding agreement on the part of the train company to get you to your destination on the day - so running off and abandoning hapless passengers would appear to be somewhat in breach of that. Then there’s where the poor commuting sods were left:

"They said not to worry there will be another bus or a larger taxi along in a minute. Then they scarpered," said actuary Alex Waite, one of the people left stranded at a roundabout near the town of Woking on Tuesday night.

Abandoned at a roundabout outside Woking. In the snow. On a Tuesday night. It would make Londonist’s top ten list of worst ever moments, were it to happen to us, that’s for sure.

So did rescue, in the form of a chariot from the deities of the track, arrive for the weary and dispirited travellers? Er, no - they had to call their own after a lengthy wait and stump up the £180 fare themselves, although South West Trains refunded the amount later. How kind of the company, Britain’s biggest train operator, which recently announced it was scrapping reliable electric trains in favour of models that break down twice as often. Rail expert Christian Wolmar offers this analysis of the hell suffered by commuters:

To solve the chronic overcrowding problems on routes like those into Waterloo, we desperately need extra capacity, such as longer platforms, extra rolling stock and more track. But that would require billions which the Government is reluctant to spend. Far easier to push a few luckless commuters on to the overcrowded roads or on to slow-moving buses. And if ministers care nothing for the hellish conditions suffered by commuters, they seem equally oblivious to the damage this policy does to London’s competitiveness and international reputation.

Disgruntled passenger Adrian Yalland sums up the situation best: “It was just incredibly rude and illustrates the attitude they [South West Trains] have towards customers. They treated us with absolute contempt.”

Photo: "Delays to be expected" by Lori Smith