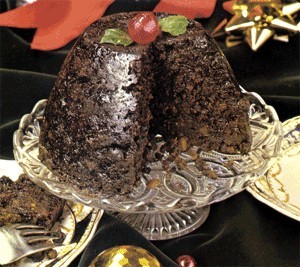 Some people find it difficult to eat Christmas pudding - it's loaded with mysterious wobbly bits and even more mysterious chewy bits; if it's a well-cared for pudding it will have been fed a reckless amount of strong alcohol over several weeks so it reeks like a tramp. And burns like one too. Some may find it easier to put a Christmas pudding on a tray and run around Covent Garden with it instead.

Those folks would no doubt be taking part in the the 26th Great Christmas Pudding Race tomorrow, from 10.00am in Covent Garden. Teams from universities, large corporations and schools have entered into this charity event and will be running a specially designed obstacle course with a Christmas pudding on a tray and must pass it, without dropping it, between team members as the relay race progresses.

As an extension of the English repertoire of endearingly eccentric food-based sporting events, the Christmas pudding race is as amusing as downhill cheese rolling and Easter pancake racing. It's also the sporting event for those who can't bear Christmas pudding and will rejoice to see piles of the stuff flying around and falling to the floor to be trampled underfoot by an over-enthusiastic geography student raising money for the Potholing Society Easter Trip.

It's not confirmed but Christmas puddings are unlikely to be allowed to race while lit, which is rather a shame because we would have liked to use some sort of "Chariots of Fire / Puddings on Fire" gag. Never mind.