Do you recognise Raffie Oxon?

By sizemore Last edited 192 months ago
sizemore Do you recognise Raffie Oxon? 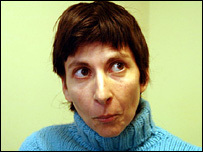 Police are asking for help in identifying a woman who has lost her memory and was found standing in the pouring rain in central London. She was discovered by a member of the public on Great Queen Street in Covent Garden in November. She said her name is Raffie Oxon and is 26-year-old, but officers have not been able to establish this. Police said she was wearing long brown cardigan and appeared clean with a southern, well spoken accent.