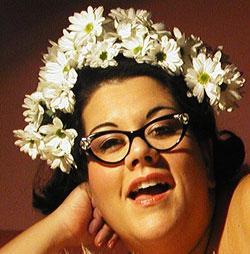 You pop in to see a neighbour to drop off some disposable polystyrene food trays (the kind divided into sections as if for TV dinners), you stay for coffee and a chat... then somehow the coffee becomes a beaker of Scotch, you sing three classic hits of the 1960s and half a dozen family skeletons come high-kicking out of your neighbour's closet, much to your horror and secret delight. Amy Lamé's Mama Cass Family Singers feels very much like this.

Written and performed by lesbian writer, broadcaster and performer Amy Lamé, famous for her time on Celebrity Fit Club, co-founding Duckie and the World's First Lesbian Beauty Contest, the Mama Cass Family Singers is a mish-mash of real and false memories of a chubby childhood spent singing in a 1960s covers band. In this solo show, Lamé recalls being kidnapped with her brother and two sisters by a mysterious woman then made to sing all over America as the Mama Cass Family Singers and explores the legacy of quirks and dysfunctional behaviour among them. As a one-woman show, it would be easy to sit through the 60 minutes without once challenging or being challenged by the sometimes quite tall tales; the whole thing could wash over you as a mildly diverting bit of stand-up comedy by a big American girl who crops up on TV every now and then.

However, Lamé incorporates amusing, sometimes poignant video clips of her real family into the show and these lend a certain friction, a slight tension to the telling of her tales. To actually see her brother sipping his enormous whisky cocktail while playing the wrong chords on his guitar raises the stakes a little and makes the whole evening a little sharper than a straightforward string of funny, fictional family stories told by one woman at the front of the stage.

The potential of introducing real characters into a fictional story is never fully exploited: there are laugh-out-loud punchlines and very funny edits in the video clips mixed with well-timed twists and turns in Lamé's excellent story-telling and yet, there is never any of the brutal frankness that we now expect from a family expose - think of The Osbournes and Wife Swap. The blurring of reality and fiction is perhaps a little too subtle, too clever in this case. When the first photos of Lamé's family are shown and she introduces her parents, her brother and two sisters in various awful early 1970s outfits and haircuts, it feels warm and genuine rather than biting and revelatory.

We are promised shocking revelations and acid-tongued wit but the show never quite manages either and is instead a faintly misty-eyed jumble of real and fictional family memories. Even when questioning how much damage childstar status had upon them, Lamé cannot bring herself to blame their mysterious kidnapper or put her parents in the dock for too long. Once she has introduced the character flaws and foibles of her family, she weaves these into the semi-fiction of their childstar childhoods and simply leaves them there, neither judging or inviting us to judge them.

A pile of sandwiches sits on stage as a reminder of how the Lamé family liked their food and were always at risk of the same gluttonous ending that befell Mama Cass. Amy Lamé 's Mama Cass Family Singers is like these sandwiches that get handed out to the audience at the end by Lamé herself: a satisfying cold snack that fills you up nicely that nonetheless makes you wish it was a three-course hot meal with plenty of sauce.