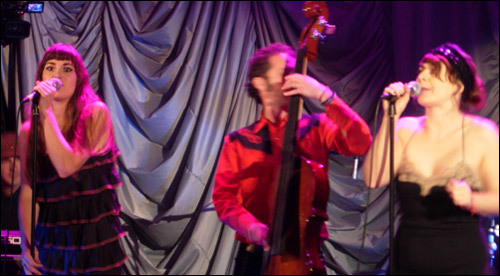 "Can we turn the lights red?" asked Nouvelle Vague singer Phoebe Killdeer during last Saturday's concert at the Bloomsbury Ballroom. "Deep red, passionate red, blood red," she intoned melodramatically. As the lights stayed candy pink, she replied gothically, "...or pink will do". The quip characterises the French band's wry take on New Wave. Covering angsty guitar and synth songs with a whole other new wave, Brazilian Bossa Nova, jazz and sixties pop, the resulting versions of classics such as Teenage Kicks, Blue Monday, and Ever Fallen in Love are melodic, sophisticated summery tunes with sweet, floaty vocals - and just a hint of fun.

The music's light, almost liquid touch is much more rhythmic on stage and resonant with depth provided by a double bass. Instrumentalists Marc Collin and Olivier Labaux are masterful players with the music beautifully complimenting live singers Melanie Pain and Phoebe Killdeer.

Playing a range of instruments - pandeiro, maraccas, cowbells, harmonica - both have an captivating stage presence. Contrasting and complimenting each other; Melanie sings sweetly with breathy, wistful tones and thanks the crowd with gamine-like "bonsoirs" and "mercis", while Phoebe's voice is darker, deeper, and more dramatic. They make an enigmatic duo, dancing with light swaying and expressive hands. Melanie plays a cute, wide-eyed innocence with the songs she leads (Ever Fallen in Love, Blue Monday) becoming loveable, charming, almost kitsch. Phoebe's songs are more animated - her rendition of Bauhaus' Bela Lugosi's Dead is almost baroque.

The concept is not always successful - their cover of Too Drunk to Fuck descends from sweet style to a riotous cacophony, with most of the audience dancing and chanting along as if the original was being played. Similiarly, their version of Blondie's Heart of Glass begins brilliantly with Phoebe archly singing a melodramatic Spanish flamenco. The song soon turns to saccharine melodies, something of a missed opportunity.

Renditions of Friday Night, Saturday Morning and Dancing with Myself recover the idea, becoming gentle, melodic, poignant and contemplative. And while this may sound somewhat winsome, not to mention novelty, the overall effect is accompanied by a wry smile, as their cute on-stage personalities and sublime music find fun and joy in the concept, celebrating the songs and the group's remarkable talents.

Words and photo by Adrian Murphy