Interview: Michael Cox Author of The Meaning of Night

By M@ Last edited 176 months ago
M@ Interview: Michael Cox Author of The Meaning of Night 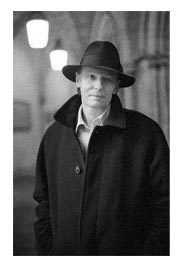 A few days back, we reviewed The Meaning of Night, a new novel partly set in the shadier parts of Victorian London. We caught up with author Michael Cox, to ask him about his London influences and plans for the sequels.

The Meaning of Night is brilliant. Where do you get the inspiration to write something like that?

In April 2004, I began to lose my sight as a result of cancer. In preparation for surgery I was prescribed a steroidal drug, one of the effects of which was to initiate a temporary burst of mental and physical energy, which, combined with the realization that the blindness might return if the treatment was not successful, spurred me on finally to begin writing in earnest the novel that I’d been working on sporadically, and to no real purpose, for over thirty years. Following surgery, work continued on what is now The Meaning of Night, and in January 2005, after a hotly contested UK auction, it was sold to John Murray, and then to W.W. Norton in the USA, and McClelland & Stuart in Canada. To date, in addition to the English language editions, the novel has been sold to twenty-two countries. [Further biography here.]

There's a strong contrast running through the novel between the idyllic country estate of Evenwood and the murky, crime-ridden streets of London. Do this reflect a preference of yours for rural areas to urban ones?

I was born and brought up in East Northamptonshire, and so I suppose I’m a country boy at heart. However, I do find certain cities exhilarating – London, of course; but also New York. I absolutely love Manhattan, and have always had a secret yen to have an apartment overlooking Central Park – though I wouldn’t want to live there permanently. In The Meaning of Night the country – Evenwood in particular – represents aspects of Glyver’s better nature, whereas London reflects the darker side of his character. I didn’t want one aspect to dominate the other, but to suggest his volatile ambiguity.

In the best traditions of Victorian fiction, you seem to have an affinity for the swirling fog and ill-lit passageways of bygone London. Are there any corners of the modern city, do you think, where something of that long-lost London can still be sensed?

So much of Glyver’s London has been lost, in the Blitz (including Paternoster Row, where the premises of Tredgold, Tredgold & Orr are located in the novel) and by subsequent and continuing development. In particular, the cheek-by-jowl proximity of elegance and wealth and utter squalor have gone. But sometimes you can still get a whiff of the mid-Victorian streetscape, though often you have to look up, above the modern shopfronts, to get a sense of what the original atmosphere was like, as well as putting in a bit of imaginative effort. The area round Monmouth Street and Endell Street – where the old Seven Dials rookery once was – I always find evocative and, though completely different in character, the streets and lanes around the Middle Temple. Saffron Hill in Camden (where Fagin had his den) also retains some of its old menace, as do the surviving alleys of Shad Thames, in the former warehouse district, south of the river.

Much of your London scene-setting is very precise with regards to locations and street names, yet the alley where the opening murder takes place is ficticious. We're curious as to why you didn't pick a real location, to get all the 'psychogeographers' excited.

I didn’t go for a real location for the narrow thoroughfare in which Glyver kills Lucas Trendle because I wanted it to have a specific name – Cain Court – referring, of course, to the biblical figure. This goes back to the stage in the book’s writing when I had Glyver killing Daunt in the same location as -Trendle, and was meant to suggest the idea that Glyver and Daunt were, in some sense, two faces of the same coin – brothers almost. Unfortunately, no such place existed!

The book clearly follows in the traditions of familiar Victorian novelists such as Wilikie Collins. Can you recommend any lesser-known Victorian novels or novelists - especially London-based ones?

There are so many forgotten Victorian novels that deserve to be better known that it is difficult to know where to start. I always mention Mary Braddon’s Lady Audley’s Secret (1862), which, with Wilkie Collins’s The Woman in White and The Moonstone, was one of the first and most successful of the ‘Sensation’ novels. Braddon (1835–1915) was prolific even by Victorian standards, and consequently her work is a little uneven; but she generally maintained a high standard. I’d also recommend Aurora Floyd (1863, admired by Henry James) and John Marchmont’s Legacy (also 1863), amongst her early novels.

We've got to ask the cheesy question: if Holywood filmed the novel, who should play Edward and Phoebus?

Who should play Glyver? I can’t deny that I’ve tried to think of someone, but am torn between whether a well-known face or an unknown newcomer might be better. I originally thought that Johnny Depp might be able to carry it off – he does a good English accent. But Pirates of the Caribbean has rather knocked that one on the head, at least for me. Whoever it is (if it is), he will have to have a strong physical presence on screen – as well as possessing highly developed intellectual gifts, Glyver is a big man, broad shouldered, and well able to take care of himself. As for Daunt, he too needs to have a strong, looming presence, though of course he’s rarely seen directly. I have an image of him that is physically not unlike Daniel Day-Lewis in Gangs of New York, though of course Daunt is a far more sophisticated character.

In other interviews, you've mentioned that you're now working on a couple of sequels. How's that going? We're hungry for more!

I’m now halfway through a sequel to The Meaning of Night, set twenty years after the murder of Phoebus Daunt by Glyver, and featuring one or two characters from the first book (though I’m not saying which ones just yet). I hope to complete what I’ve always thought of as a trilogy with a final novel that would take the story of the Duport succession through to the First World War, when the great estates like Evenwood began to collapse under the weight of death duties and the loss of male heirs on the Western Front.

Will London feature more or less prominently in those?

I’m sure that London will continue to figure in future novels – it will, I think, always fascinate me – though perhaps not to the same degree as in The Meaning of Night. In the sequel I’m now working on I do intend to have a number of London chapters, though the main action takes place at Evenwood.

We like the online 'supplementary material' (maps, family tree, character summary...). Some of it even hints at the fates of the main characters after the book ends. Was this bonus info your idea, or something driven by the publishers?

John Murray were always keen to have a website, as was I. I think supplementary material, like maps and genealogical information, is really useful for readers, especially in a book like The Meaning of Night. The maps were drawn by my father, and I used them myself constantly for reference, and they’ve also proved invaluable as I’ve been writing the sequel. I also like to collect contemporary images of people on which to base my characters. Lord Tansor is the best example. As soon as I saw a photograph of Earl Bathurst, I knew it was Lord T. This is in fact the photograph I describe Glyver taking of his father in the book.

Is this an aspect you'd consider developing further if you write those sequels - using other media to expand on the novel?

I think the use of other media is very exciting. Audio books, of course, are one means of extending the book’s audience – there’s an abridged version of The Meaning of Night currently available, superbly read by Peter Eyre, and an unabridged reading (22 hours!) is currently underway. The internet also offers new possibilities that I’d certainly love to explore, both to reach new readers and to expand on the novel itself.

What's your earliest memory of London?

My earliest memory of London is being taken to visit the Tower by my parents, aged six or seven.

Do you have a favourite or special area of London?

I love the bustle of Piccadilly and the Strand – imaginatively replace the taxis, Mercs and BMWs, and bendy buses with horse-drawn hansoms, omnibuses and carriages, and you can still get a sense of the similar (and perhaps even worse) traffic chaos of mid-Victorian London. I’m also fond of the Inns of Court, Albany, the great residential squares (e.g. Bedford Square), and St James’s.

Do you have a faourite pub or bar?

I’m afraid I don’t drink, so don’t have a favourite pub. However, I was recently taken to Gordon’s Wine Bar, in Villiers Street (in the heart of Glyver territory), which has an authentic Victorian ambience that I much enjoyed.

If you could offer Ken Livingstone one piece of advice, what would it be?