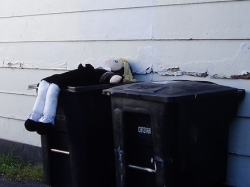 TV Troll has been dilatory of late. We missed the return of our favourite Aussies on Monday (Kath & Kim, Mon 10pm BBC2), we didn't warn you about the return of X Factor (Fri 8.30pm ITV1), and, most damningly, we didn't even cover the Big Brother final. Apologies – but we reckon the blanket coverage of BB absolves us a bit, and we'd given up by the last fortnight anyway as it was becoming more and more of an effort to try and care about the housemates. Love Island is over now too, thank goodness.

But this does not mean TV Troll is turning into some irritable Selina Scott-style mistellythrope, no no no! For while Ms Scott expounds her views on the crapness and cruelty of reality TV (yawn) in Don't Get Me Started (Tue 7.15pm Five), we're busily counting down the days until the return of Beauty And The Geek (Wed 10pm E4), the best dating contest show ever. Last year was affecting and gripping; watching the guy with borderline autism learn to dress less like a Spectrum engineer circa 1985 and more like a normal twentysomething was just adorable; watching the Beauties build rockets without breaking a sweat or a nail was equally enthralling. We have high hopes for this series, too, and it's perfect hangover-viewing material for Saturday mornings.

Would Selina include The Apprentice USA in her broadside against reality TV? Is it exploitative to show such raw footage of a man with such belief-defyingly bad hair, thus giving lazy TV writers endless opportunities for bad puns (Trump chooses his hair apparent, maybe)? Showing the willingness of the contestants to not merely stab each other in the back but also to garrotte, encase in molten lead and shoot into the sun anyone who gets in their way isn't really cruel, either, since as far as we can tell Americans are perfectly at home with red-in-tooth-and-claw depictions of the corporate jungle/bloodbath. Whatever, we're just glad it's not the Martha Stewart version where contestants weren't fired, but rather told that they just weren't a good fit. Why, some of them probably hadn't even knitted their own toilet seat covers out of hand-gathered kitten fur! Anyway, with Trump's business empire apparently not in the best of health – struck by the Apprentice curse, perhaps? – it may turn out that losing is a better long-term career move than winning.

We're not going to bore you with tedious and pointless ruminations on what really constitutes reality TV these days; we're just going to point out that a) we're very glad we're not parents of a child going through the UK education system (Admission Impossible, Wed 9pm C4 concludes this week and leaves us gasping is disbelief at the sheer callousness and drive needed to navigate the London school system – it should be proposed as a task for future Apprentices) and that b) we love Ann Maurice (Ann Maurice: Interior Rivalry, Thur 9pm Five) and we are delighted to hear news that she is replicating herself by "hundreds of home-staging wannabes through their paces in an arduous set of tasks to test their design skills". One House Doctor is not enough! Sellers of beige paint countrywide are thanking her in their prayers at this very moment.

A couple of intriguing double acts: The Charlotte Church Show (Fri 10pm C4) is immediately followed by another new series, Da Ali G Show (Fri 10.50pm C4). Chaz and Ali G are both self-aware self-parodies, which makes the scheduling strangely appropriate. We eagerly anticipate the new breed of catchphrases Mr G will undoubtedly unleash; we wonder if Ms Church has the personality to sustain her own show; we start to count down the seconds until the two shows cross-pollinate, with Bruno giving Charlotte fashion advice or with the Welsh belter rapping with Ali G. How post-modern that would be. The other – even less appetising – double bill is Swinging (Wed 10pm Five) and Respectable (Wed 10.30pm Five), Five's less-than-stellar sex-themed sketch show followed by a comedy set in a brothel filled, not with (Guardian-reader hat going on) trafficked and abused drug addicts from war-torn hellholes, but tarts-with-hearts-of-gold who are in the oldest profession through choice and who don't touch anything stronger than Tio Pepe. Hmm. Respectable will have to be something rather special to overcome those origins, and given that it's a comedy – on Five – we're not holding our breath. Poisonous advance

More double action: Two of our favourite comedians are on the box this week, and we admit to a certain trepidation about the formats. One of the geniuses behind Peep Show, David Mitchell, is a panellist on new C4 ironic piss-take-fest The Best Of The Worst (Fri 9.30pm C4). While we admit to a soft spot for the truly bad - BadMovies is something of an addiction - is TBOTW really necessary? Will we love Mitchell when he isn't being Mark, loser extraordinaire? Armando Iannucci's Time Trumpet (Thur 10pm BBC2) is a treat for fans of the owner of the most sardonic eyebrows in modern comedy, and we can only apologise abjectly for not mentioning it before. There's an excellent and balanced review here and the website is a veritable virtual tub of Ben & Jerry's Cookie Dough ice cream, packed with irresistible lumps of sugary, lardy goodness.

The week's TV controversy is provided by Shoot The Messenger, which has already been branded as "racist". Following the attempts of a black, male teacher who just wants to make the world - particularly the world of his povery-stricken pupils - a better place, it shows his descent into madness and revenge after his do-gooding backfires. Sounds pretty damn depressing - although there are apparently odd rays of black (er, no pun intended) humour to leaven the bitterness somewhat. Speaking of bittersweet, we have the proverbial good news/bad news to end with: The Sopranos is back - huzzah, rejoice, rejoice! But: it's the last ever series. Boo, hiss, no fair. All good things must of course come to an end, but we had hoped and prayed to the gods of TV that the continuing story of Tony Soprano wasn't one of them. Perhaps if we sacrifice Noel Edmonds in his place, karmic balance will be restored and we can have a few more series. No?

Trash Baby photo from Michael_L's photostream, used, with thanks, under a Creative Commons licence