Protesting Is Not A Crime ... Yet

By Jo Last edited 166 months ago
Jo Protesting Is Not A Crime ... Yet 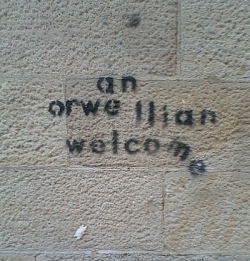 Are you worried about the creeping loss of civil liberties in Britain? We are, having had our own run-in with heavy-handed police not so long ago. So when we received the following email, we thought it'd be a great idea to post it up here, in order that as many of you as possible might read it and with any luck decide to take part:

A recent law has made it illegal to protest anywhere near parliament without official police permission, and comedian Mark Thomas is organising a stunt to highlight the danger and stupidity of having this law in a democracy. Please note that taking part in this is 100% LEGAL, and the whole purpose of the stunt is to overload the system by dozens of people all asking for permission to protest all at the same time.

Under section 132 of the Serious Organised Crime and Police Act it is an offence to organise or take part in a demonstration in a public place within the “designated area” (up to 1km around parliament) if authorisation has not been given by the Metropolitan Police Commissioner. Participants may be subject to a fine of up to £1000 and “organizers” face up to a year in jail.

Dozens of people have been arrested for not complying with the law even when they are taking part in “Lone Demonstrations” – i.e. if they are one person with a placard.

Many people see this legislation as an assault on our civil liberties and human rights.

Some more information and groups affected here, here and here.

However if you apply for permission 6 days in advance for a lone protest (ie 1 person) they cannot refuse permission so in order to highlight the ridiculousness of having to ask for police permission to hold a peaceful demonstration, Mark Thomas is organising a mass lone demonstration evening.

Decide on your protest! This can be something you feel strongly about or something very silly - it’s up to you. Then you need to fill in the official form (which is very simple) and there is a copy of the form here.

Meet on Thursday 24th August outside Charing Cross police station any time 5.30pm-6pm to hand in your SOCPA forms.

You have to fill in the form and hand it in to the police 1 week before your protest, so everyone has to turn up at the same time to give their forms to the Police. This will mean if 100 people turn up and apply for permission, then the police have to license and approve 100 lone demonstrations

If you can’t make it to hand the forms in but want to demonstrate on the 31st, either scan and email the forms to this address, or post them to:

The mass lone demonstrations will be 1 week later on Thursday 31st August in Parliament Square and will again be at 6:00pm for 1 hour, so this event is open to those with day jobs.

Come along! Join in! Exercise your democratic rights! The more people who come the bigger an impression this will make!

www.s2s.co.ukIf you think - as we do - that this is a good cause and worthy of wider attention, please pass this link on. Post it on your blog, link to it on your LJ, write a song about it for your MySpace, do an arty photograph about the loss of civil liberties involving kittens and a sunset and post it on your Flickr - but please, pass it on. Thanks. This particular Londonista, by the way, will be protesting about the excessively loud "MIND THE GAP, PLEASE" announcements at Mile End; what's the most inventive thing to protest against you can come up with? We'd love to hear.