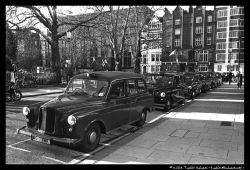 … The Knowledge, that is, the essential - even in this age of satnav - mental map that allows London taxi drivers to get around. Considering that this Londonista tends to think of the map of our great city as being covered by the "fog of war", as used in games such as Command and Conquer or Zelda, with clear patches in bits we're familiar with but the rest concealed by a thick black cloud, the thought of acquiring sufficient Knowledge to function adequately on London's mean streets is terrifying. And we're not the only ones: it takes between three and four years of (part-time) study to learn the Knowledge, including the order of all the theatres along Shaftesbury Avenue, and the latest figures show that applications to do the Knowledge have dropped by 40%.

So is this a crisis in waiting for lost tourists, drunk revellers trying to get from N7 to E3 at 3.07am, businesspeople dashing from office to client, and the millions of other Londoners who hail a taxi every day? Not if Tony Norris has anything to do with it: He's set up a school for cabbies, in association with ComCab, a taxi network, and Mann & Overton London, who sell Hackney carriages - both of whom might be said to have a certain vested interest in ensuring the London cabbie does not die out any time soon. Tony has been behind the wheel of his black cab for some 20 years - we bet he has the odd "you'll never guess who I had in the back of my cab the other night" story or 500. Tony says:

"I try and keep those who do apply with their feet firmly on the ground, look after them and make sure they are doing the right things at the right time. If they do what I ask, they can get through. I play my role in making them understand it is worth it in the end and worth sticking with.

And worth it in the end it is: while income depends, of course, on how many punters a cabbie shuttles around town, they can earn up to £30k. Scientists have even found that London taxi drivers have a larger hippocampus (area of the brain thought to deal with navigation) than the rest of us.

Tony's new school in White City already boasts several students, even before its official opening. So, if you reckon your hippocampus could do with a bit of a stretch and you can spare time for three sessions a week, head over to Harry Feigen House, W12 - if you can find it, of course.