Londonist Gets Off Its Arse: Some Bits Of St Pancras (Part 2)

By Dave Haste Last edited 190 months ago
Dave Haste Londonist Gets Off Its Arse: Some Bits Of St Pancras (Part 2) 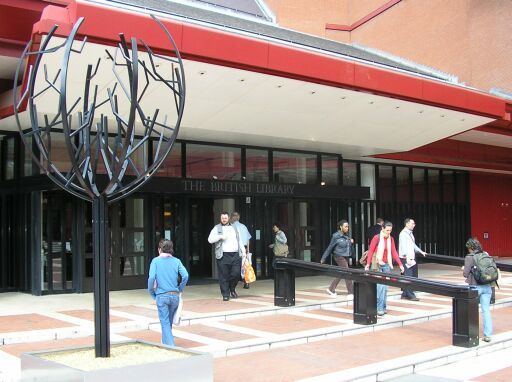 Following our visit to St Pancras Old Church, the next destination in our exploration of St Pancras was The British Library.

Retracing our steps back through the seemingly deserted Somers Town, we walked into the spick-and-span building of the UK’s national library. The building’s contemporary design almost seemed to be intended to obscure much of its history, which was quite a contrast after the much-less-spoilt church that we had just visited. Still, we suppose that any building is going to come off second-best when comparing its historical credentials with those of the country’s oldest church! 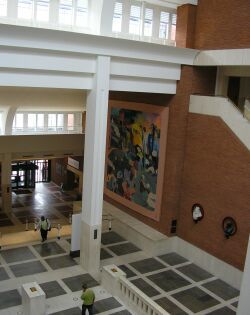 A leaflet from the pristine foyer suggested that a good place to start exploring might be The King’s Library, a glass tower that runs through the heart of the building and encloses 60,000 books that once belonged to King George III. Not bad, but we were a bit disappointed that we couldn’t get into the tower, or in fact anywhere near the books. Understandable, though – they probably don’t want our grubby fingers and beery breath ruining the old books.

Being utterly unprepared (and without the requisite documentation to obtain a ‘reader pass’) we were unable to get into any of the reading rooms. Not that we really had any legitimate business there anyway. Apart from a few walkways, a café and some toilets, there didn’t immediately seem to be much else to see, so we were just about to leave the building feeling rather underwhelmed when we noticed a couple of rooms off to the side of the main foyer that were hosting exhibitions…

In an atmospheric room with subdued lighting (the Sir John Ritblat Gallery as we found out later), ‘Treasures of the British Library’ are illuminated in display cases. These ‘treasures’ are historic and often sacred texts from around the world, including documents that ‘both made and recorded history’, rare religious texts, significant landmarks in the art and technique of printing, classic works of literature and original examples of major literary advances. Notably, in a special annexe all of their own, original copies of the Magna Carta and some associated documents are displayed, with an audio-visual commentary provided by a dedicated ‘virtual curator’ (which turns out to be an interactive monochrome video of a slightly bored looking woman). This exhibition alone is worth the trip to the British Library – the room’s décor and lighting add gravitas to over 250 exhibits that are seriously impressive in their own right. 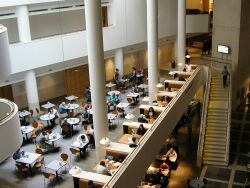 In the next room we found a temporary exhibition, ‘Front Page – Celebrating 100 Years of the British Newspaper’. The title speaks for itself, but the exhibition could still happily occupy half an hour or so, especially with the impressive ‘interactive virtual newsroom’ section where we were encouraged to compile our own front page, which we could then print out for us to take home.

Having redeemed itself towards the latter part of our visit, we would say that the British Library is definitely worth a visit by the curious explorer, if only (or at least) for the exhibitions. It certainly provided an interseting diversion for an hour or two, and maybe next time we’ll be sufficiently organised to take along a couple of forms of identification so that we can check out the reading rooms.

Summing up our little exploration of St Pancras, we found the area to be crammed full of interest. No surprise, really – in a district whose name dates back to the early 4th century (St Pancras was apparently a Roman martyr) and that once hosted Anglo-Saxon settlements beside the long-lost River Fleet, there’s plenty of historical substance available. In our wander around the area we only managed to explore a small part of all this, but we dare say we’ll be back…