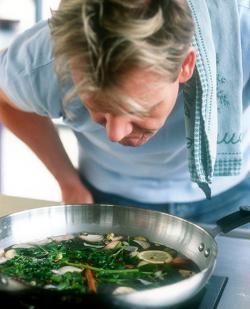 ... is pretty fugly. Judging by how it chooses to be presented on the small screen, at any rate. Take Gordon Ramsay's F Word (Wed 9pm C4): We're not denying that it's entertaining. It is hugely entertaining, especially when Gordon picks on twattish City trader boys from Essex and reduces them to tears, much as he reduces all sorts of delicious juices to make a lovely concentrated sauce. Mmm, we're hungry just thinking about it. The section in last week's episode when he taught the divorced cabbie to cook healthy meals for his kids was sweet, too - sweet as one of the fabulous-looking squidgy apple pustule things he made last week. But altogether, it was a bit like a bad fish stew Londonist had the other week - hundreds of different bits clamouring for your attention. OK, 'bad' is a bit harsh - we still gobbled the televisual feast down happily enough - but it wasn't Ramsay's best work. And we have to ask what is wrong with the world when the restaurant-goers feel perfectly within their rights to withhold payment just because their dinner is 45 minutes late, burned on one side and raw on the other; we mourn the loss of the British Blitz Spirit, that "put up and shut up" attitude that made this country great.

No, if you want to see Ramsay at his best, you need to watch Hell's Kitchen USA (Thur 8pm ITV2), where the grumpy ginger one with a face like the Churchill bulldog makes a succession of hapless Yanks cry rivers of blood and sweat and, yes, tears, in the mould of the abrasive Briton first put to use by Simon Cowell. Squeezing the last drop of extra virgin out of the poor abused olive of our crappy metaphor, it's a fresh and crunchy salad compared to The F Word's artery-clogging mascarpone and lard cheesecake.

The face of Britain is permanently wrinkled in horror at the price of a house nowadays, to continue the crap metaphor theme we have so successfully established; one of our favourites in this genre has to be Property Ladder (Wed 8pm C4), as we sit in our (rented) dungeon with a bottle of meths and cry gently as we contemplate our chances of ever being in a position to grab the bottom rung of the damn thing. Shakespeare, in Julius Caesar, wrote:

Whereto the climber-upward turns his face;

But when he once attains the upmost round,

He then unto the ladder turns his back,

Looks in the clouds, scorning the base degrees

By which he did ascend.Much like the utter sods at the top of the property ladder who have used the ridiculous values of their houses to buy second homes and buy-to-lets, thus screwing the rest of us over ... forgive our digression. Sarah Beeny is raising her eyebrow disbelievingly in Upper Street this week as a load of hapless home-owners try to claw their way up a bit higher, with only such niggling problems as the UK planning laws and their own utter (Upper?) incompetence to drag them down. If they decide to jack in the property game and move to a hotel, we hope they watch The Hotel Inspector (Thur 9pm Five) first, as we're shown once again that Fawlty Towers was a lot closer to documentary than it was to comedy. Not to diss it as a comedy, naturally, although we always found it a bit too cringingly close to the bone to laugh at.

We're holding our head in our hands at the prospect of Celebrity Tudor Wedding (Thur 8pm Five), the Celebrities in question being Lowri Taylor, Jenni Eclair and some bloke we've never heard of (Kevin Woodford, who he?), and the Tudor Wedding being un mariage au Henri VIII, although with any luck it won't run a 1/3 risk of ending in a beheading. The happy couple willing to forego such modern wonders as the post (they'll have to use carrier pigeon to invite people), the internet (lazy guests won't have the option of buying online and having someone else sort out the delivery), and, um, cars (any guests coming from further afield than John O'Groats better start swimming NOW) sound like they need their heads examining to us but there you go. The photos should be good, too, although maybe not as good as this - oh wait, we forgot, no cameras! Apart from the TV cameras, of course, heaven forfend. More celebrity horseplay in Only Fools On Horses (Fri 8.30pm BBC1), which, as huge Jilly Cooper fans, we will be watching: in a novel twist on the 'watch famous people do something they've never done before and vote them off in a Darwinian battle to the death' (we love those, we do), a load of slebs learn to steer big hooved animals over fences for charidee. We're told they all fall off. Lots. Hurrah! Tally ho!

Finally, our dungeon being as it is in close proximity to Canary Wharf, we could have told you that it harbours a deep and abiding evil in its bowels. It's called the Daily Telegraph, and it lives in One Canada Square (although not for much longer - they're moving lock stock and barrels of Thunderer blunderbuss pellets to Victoria in a few months' time). Only joking! But clearly someone else feels that the pointy phallus of the Isle of Dogs is a natural place for evil to reside, and that person writes for I>Doctor Who (Sat 7pm BBC1). We'll bear that in mind next time we trundle past on the darling DLR. Come to think of it, the London 2012 committee currently occupies the top floor of Britain's tallest building; is there something we should be told?