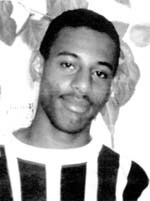 Some crimes are more than just crimes - the Dreyfus affair is one example that comes readily to mind. In modern Britain, no murder has had more of an impact than that of Stephen Lawrence in 1993 (was it really 13 years ago already?), the black teenager killed by racists, whose murder triggered an inquiry that found institutionalised racism

Stephen's murder will never really go away, but it is brought back into the spotlight by news that the IPCC has just launched a probe into allegations of corruption. The new claims centre on money paid to a Met officer by the father of one of the original suspects (branded "Murderers" by the Daily Hell - the first and last time we've ever agreed with that particular rag), who happens to be a drug dealer. While it is quite clear to anyone with half a brain that the original Met investigation was more shambolic than Pete Doherty after a session honking on his crack pipe, this new allegation takes things to a new level - especially since the whistleblower claims to have told the Met about the corruption in 1998. The Boys Who Killed Stephen Lawrence (Wed 9pm BBC1) will look at the new evidence; perhaps justice will now be done, over a dozen years later. But with only one officer having been found guilty of one offence - out of a dozen - for the original failings, don't hold your breath; we all know that weaselling out of taking responsibility for bungled operations is what the Met does best.

On to the lighter side of things, and metatelevision is always a good bet; the new series of Charlie Brooker's Screen Wipe (Thur 10.30pm BBC4) delivers all the witty commentary on TV you will ever need. Now, we won't bore you rigid with how much we love Charlie; we will note, however, that the Troll Dungeon's crappy £30 Asda digibox has packed up. Panic stations! This means we will also miss Lord Of The Dance Machines (Thur 10.30pm BBC3), all about the phenomenon that is Dance Dance Revolution. Having gone through a brief, if inept, period of addiction to DDR, we're keen to see this, as it follows two kids who enter a DDR tournament. If you're unfamiliar with the game, check out the videos at DDR Freak; we highly recommend this one (7MB video) featuring 'drunken style'. Forget Flying Crane and Nervous Hare and Tranquil Chrysanthemum and all those other kung fu moves - DDR is what the Shaolin monks are using as a training aid these days. We once saw a skinny ginger kid in a Slipknot t-shirt pull a 500+ combo on an insanely difficult track at the Trocadero using all four limbs, and it was a timely reminder that there is not much that cannot be achieved if you really put your mind to it - and have an endless supply of 50p pieces, and an inhuman level of tolerance for helium-voiced J-pop. (P.S. Want to play DDR without the sweating, the expense and the sneers of the adolescent Wunderkinder? Why not try this?)

TV or outside? It's a simple choice. Outside is sunburn, prickly heat, and the inescapable glare of the sadistic Cyclops in the sky. Inside is aircon, no obligation to stick to common conventions of public decency, and the comforting glow of the friendly box in the corner. No contest there, then. And for summer - traditionally a bit of a dead time for telly - the schedules, while not being exactly thrilling, aren't too bad. If you ignore Love Island (too bloody often, ITV1), that is, something we've never found too difficult in the past, although we bet that this season is approximately seven million times better than the last, for the simple reason that Paul Danan isn't in it. Small mercies and all.

Some people will put up with anything, as Love Island shows. More evidence for the prosecution: I Love You. And You. And You. (Wed 11.05pm C4), examining the polyamorous community in the UK. Polyamory sounds rather more like having lots of cakes and eating them all than it does like an actual sexuality to us; but then, we're hardly experts. We'll be watching this because like everyone else we're incurably curious about how polyamory actually works. Does one put in a shag request, much as one puts in a request ticket to the IT department at work? Perhaps a lack of jealousy is what defines the polyamorous, as we can't see it working any other way.

New reality show of the week: How Do You Solve A Problem Like Maria? (Sat 6.50pm BBC1), where Andrew Lloyd Webber looks for a singing nun to star in his new production of The Sound Of Music at the Palladium - although, as Popbitch notes, apparently the winner will share performances with, er, a famous stage actress doing six shows a week, and the democratically-chosen Maria the other two. We'll see. Runner up for new reality show of the week: Restoration Village (Fri 9pm BBC2), where lots of picturesque ruins compete for your vote, in a reality show where, for once, you don't want anyone to be kicked off. And speaking of getting kicked off, it's last orders for Top Of The Pops in TOTP: The Final Countdown (Sun 7pm BBC2), where stars past and present are called on to - can you guess what? Yes! - to talk about their experiences on the show, and to watch old clips of past performances from the biggest names in pop. (We reckon this list is far more fun.) Is it all down to MySpace that TOTP is a dead format? Nah - we blame Fearne Cotton. Well, it makes sense to us, anyway.