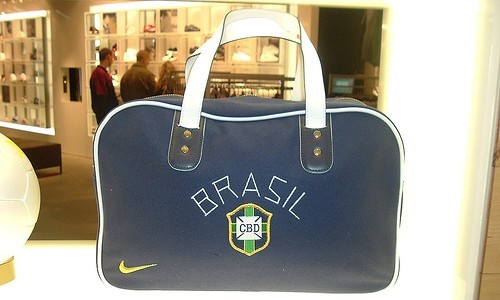 We at Londonist enjoy a shock prediction as much as the next tournament previewer, but Brazil are going to win this group. Comfortably. We just don’t think they’ll win the cup.

It’s likely they will score eight or more goals in the opening three games such is the awesome nature of an attack that will critically puncture most opposition, but in the knockout stages the better teams and the more sophisticated coaches might start thinking about how they can exploit the combined 69 years of Brazil’s fullbacks who were happier in 2002 as wing backs than they are now as defenders in a four. Manager Carlos Alberto Perreira is twelve years on from leading Brazil to the title and not as tactically cute as Big Phil Scolari from the last world cup while expectation at home is somewhere significantly beyond overwhelming, unlike in the run-up to those triumphs, but exactly as it was in 1982 and 1998 when they came back with nothing. It might take until the final, but someone is going to benefit when that bubble bursts.

The fun here is going to be who qualifies with them from, in our estimation, the second strongest group in the competition. According to the FIFA rankings it should be Japan. At last summer’s Confederations Cup in Germany they drew with Brazil and beat European champions Greece. Japan have a tight defence and a midfield that’s responding to Brazilian coach Zico’s encouragement to play with flair and invention. However, they lack a reliable goalscorer and, perhaps crucially, many players with experience outside Japan.

Croatia have several players plying their trade in Germany itself, but, like several of their national colleagues, not as first choices. Croatia reached the semi-finals the last time the tournament was played in Europe, but this vintage lacks the individual talent spread through that team. The current style of play is very much based on building from a strong defence and taking advantage of set-pieces which will serve them well if only they can get out of this group.

Australia, in their first finals since the last German tournament in 1974, are not a pretty side to watch, either, but do have some quality up front. Several squad members are of Croatian extraction while a few of the Croatians have Australian roots. Both teams have a never say die attitude, but starting with their playoff victory over Uruguay on penalties the Australians have had Guus Hiddink in the dugout, a man who has taken the Dutch and the South Koreans to the semi-finals by maximising the options at his disposal and keeping opponents off balance. We back him to tip the scales for Australia in what should be an enthralling scrap for second place.

The problem with Brazil is working out who’s going to score all those goals. Adriano is risky because he’d probably be the first to go if Brazil struggle a bit. Ronaldo looks overweight and might lack motivation, but is still dangerous while Ronaldinho is more likely to provide assists than score. Kaka looks a value midfeilder with his marauding down the right likely to result in several tap-ins and the occasional solo effort. Ronaldo’s the best striker gamble as he may get four or five even if not fully fit. Roberto Carlos, though often wildly inaccurate, is still one of the defenders most likely to score in the tournament. Any of the above should get significantly above nul points.

Croatia also have some noteworthy attacking individuals. Big striker Dado Prso of Rangers got five in qualifying, but so did star value right winger Darijo Srna, including three from the penalty spot. Prso’s strike partner Ivan Klasnic of Werder Bremen has hit a run of form at the right time, but may be sacrificed for a defender against better teams. Igor Tudor is often classified as a defender, but plays in midfield and scored twice in qualifying.

Tim Cahill, on target once more yesterday against the Dutch, provides another top midfield choice and is far and away the best option from the Australian squad. Japan’s midfielders like to let fly from anywhere and dead ball specialist Mitsuo Ogasawara looks the best bet for Japanese goals while, if you believe in their defence, Yuji Nakazawa often scores from set pieces while Brazilian born former winger Alex and Akira Kaji are both attacking fullbacks.