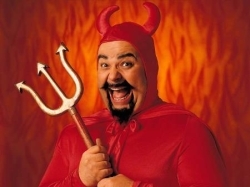 And you thought the God Squad was a mere turn of phrase. If the previews for God's Next Army (Mon 8pm C4) are right, then the Grand Old Party should be on its guard as a Trojan horse of bright young things - bright, utterly fanatical young zealots from fundie colleges in the South, we should say - is preparing to take it over from the inside. Yes, in this documentary we get to meet a fledgling Christian Right more terrifying than the current lot in charge of the United States, who make our favourite Baptist Betty Bowers look like a satan-worshipping Slayer fan. Just for cheap laughs, Londonist has braved the website of the archetypal ultra-Christian Bob Jones University (which only lifted its ban on interracial dating in, er, 2000, for the excellent reasons that "We can't back it up with a verse in the Bible" and "We realize that an interracial marriage is not going to bring in the world of antichrist by any means") to bring you some of the rules that BJU undergraduates must abide by:

Each night all students meet for prayer, either as a room or together with several other rooms.

Students are required to be in their own rooms and quiet at 11 pm. All lights must be out by midnight.

Students are required to keep their rooms clean and neat. Rooms are inspected daily.

Posters of movie and music stars and fashion models are not permitted. The subjects of personal photos should exhibit the modesty and appropriate physical contact we expect from our students.

New Age, jazz, rock, and country music is not permitted.

All weapons must be turned in for storage. Trigger locks are required for pistols. Fireworks are not permitted on campus.Well, there isn't much we can add to that, except that the thought of the USA being run by a bunch of pious freaks who are used to daily room inspections (and daily cavity searches too, in all probability) is petrifying. We bet God's Next Army is a hell of a lot scarier than the Omen remake due out tomorrow (6.6.06 geddit? Huh?).

Another of Londonist's favourite things is under the macromicroscope in Imagine ... A Short History Of Tall Buildings (Sat 7.20pm BBC2); Alan Yentob gets all frothed up by the works of Le Corbusier and Mies Van Der Rohe. One for the skyscraper geeks out there - and we know you're out there - for whom things are getting better and higher all the time.

Apparently there's some sort of football contest on this week. How tiresome. Do we care? Not when there's a Golden Ticket winner going into the Big Brother (daily, all the time, C4, E4) house this Friday! A poor lamb for the slaughter? Perhaps - or maybe, as in stupidly addictive US reality show Paradise Hotel, the newcomer will have been watching the housemates like a hawk for signs of weakness, and will do his/her best to mess with their heads and shift group dynamics. (Oh, and this is the best BB moment of all time, bar none. 91.6%!) Sunday night looks like a ridiculously good bet for extended sofa-time, too, with the triple bill of The Singing Estate (Sun 8pm Five - posh classical muso bloke tries to turn the residents of a normal housing estate into a choir worthy of performing at the Royal Albert Hall - a new Rock School, with uplifting choral harmonies rather than bitchin' guitar solos? We hope so), Francesco's Italy: Top To Toe (Sun 9pm BBC2 - we love a good, indulgent travelogue, we do), and ITV's Best Ever Ads 2 (Sun 10pm ITV1, which promises, Ronseal-like, to do exactly what it says on the tin). Finally, UFOs: The Secret Evidence (Fri 7.10pm C4) looks genuinely fascinating, and may prove the dedicated skyscanners at the 'other' FT were right all along. We knew it - alien seduction technology is the only reason for the sexual success of a certain England coach we all love to disparage (Sven: The Coach, the Cash And His Lovers, Thur 10pm C4). The truth is up there.