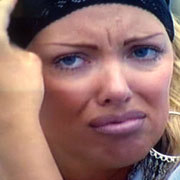 Big Brother (Fri 8.30pm/10pm C4): Just when we were starting to tire of Lea's monotone Black Country whine and Nikki's helium hyperenunciation ... As everyone and her pet terrapin knows, there will be FIVE - count 'em, FIVE - new housemates unveiled to the viewing public tonight, with either Susie or Aisleyne joining the new House in the mythic land that lies On The Other Side Of The Diary Room. It's probably going to be Aisleyne, according to the bookies, which should prove hilarious viewing, since according to Digital Spy, Aisleyne is known and hated by four of the new housemates, when they all did a 'trial run' of Big Brother a while back. Honestly, is there anyone in the entire country left apart from us who HASN'T auditioned for or been involved in dry runs for the House?

We're hoping that Aisleyne gets to join la nouvelle maison, as her loss should shake up the group dynamic to (with any luck) fruitful end, despite the unfortunate side-effect it will have of making Lea happy after their set-to the other day. The fight made us dislike Lea more than ever, as she responded to all of Aisleyne's criticisms and examples of her bitchiness with hugely frustrating "no, you do that, not me"-style stonewalling. From a woman of (ahem) 35 - or is it 36, we can never remember - it's childish in the extreme. Anyway, returning to the nominees, Susie could be replaced with a RealDoll (™) and we doubt anyone would notice. Actually, having said that, it was notable how Susie was blamed by the Housemates who nominated her for "killing the atmosphere" in the House; her disapproval of Glyn's tired and emotional upchucking was particularly tedious in this respect, especially her comment that "my friends don't do this kind of thing". Giving free reign to Londonist's poisonous prejudices about the kind of people we imagine are friends of Susie's, we're doubtful that the fact that they probably snort mountains of gak, and cheat on each other left, right and upside down in fluffy handcuffs, means that their failure to lose the contents of their stomachs in public after a nice wine frenzy makes them by necessity better, worthier members of society than poor little Glyn. We agree with Mikey on this, worryingly - "he's an 18-year-old lad, what did she expect?"

In fact, when Susie finds going to buy a pint of milk the hardest thing about living in London, we have to wonder where her priorities lie. Hearing Susie and Richard make the tiredest, most clichéd complaints about London (it's busy, crowded and hard to get around here, apparently) just confirms what we long thought: that the self-appointed 'House Team Sensible' are boring as fuck when they're being, well, sensible. Richard's still in our good books, though, mostly for telling Nikki to "sit on a banana - you might enjoy it" after she threw a shitfit about his touching the aforementioned fruit.

The question of whether Aisleyne knows what's in store for her (or Susie) has been taxing us somewhat after we read this - if she has indeed guessed the secret House twist, that'll take a lot of fun out of the evening's events. Much of BB's addictive power comes from knowing things the housemates don't, and getting to feel all smug and superior. We don't want an Aisleyne/Susie who is prepared for a new House - we want an evictee who feels rejected, confused and completely disoriented. So who's joining the Secret House? We don't know, but if there are new female contestants with their own breasts rather than unnaturally perky sacs of silicone, we will be pleasantly surprised.