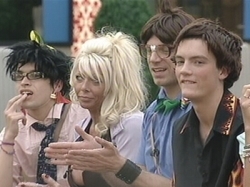 We found it hard to imagine how last year's Big Brother could have been topped; OK, Science or Eugene should have won, but it provided reliable entertainment and too many coffee-machine moments to mention. This year's hasn't quite reached those highs, but we feel it's still in the process of bedding in - like some evil plant, a mandrake, maybe - and is just coiling itself up and building pressure before the big explosion, the Krakatoa of reality TV.

There was a mini-explosion last night, although whether it relieved the pressure or was a mere harbinger of future carnage is unclear. Were we so inclined, we'd bet on the latter (with fingers crossed). Watching Richard have a stand-up fight with Sezer (or Sleazer as some wags call him) and the rest of Team Plastic after Sezer accused him of being mean to poor little Imogen was very hard to watch. Yes, Richard bullied Shahbaz; yes, he bitches behind backs with the best of them (although even Martin Luther King would find it hard not to have a good backbite about some of the walking wastes of carbon in the House this year), but he's no worse than anyone else in there - and after the way Sezer/Grace/Imogen (the axis of vapidity?) treated newcomers Sam and Aisleyne, they didn't have a leg to stand on. No-one came to Richard's rescue, either, although bless Pete for sitting with him later and commiserating, interspersed with his yelps of "wanker" - and as Pete noted, "I love it when my Tourette's is in context". The only consolation is that Sezer is the firm favourite to be evicted - and again, were we so inclined, we'd put a fair bit of money on him exiting the House to be greeted by a wall of boos, the likes of which no housemate has ever encountered.

Aisleyne (another name from the Orlaith school of 'if they can't spell it, they can't vote for me by text, mwah ha ha', we feel) and Sam: welcome to the House of 'fun'. Sadly, the rumours that Kinga and Kemal or Saskia and Maxwell were to be put back under Big Brother's all-seeing eye were not true - but it's not too late. Put in Science as a replacement for George, please, Big Brother gods? That'd make our decade.

We don't quite know what to think about George's walkout. If he weren't chasing instant (albeit transitory - he's no Jade) fame, why did he agree to go in in the first place? It's not like this is the first series of Big Brother, all those years ago, when Nick, Caroline, Mel and the rest emerged blinking into the flash of pap cameras to find they were famous, and part of a nation-wide sensation. Maybe George doesn't read the tabloids (or the broadsheets or watch TV, or, indeed, leave his house - in which case, why the hell did he apply?

The other current reality TV sensation is, of course, Celebrity X Factor. While it may be beating BB in the ratings, we surely can't be alone in thinking that it's not a patch on the non-celebrity version. Without the build-up of the audition stage - and with some of the worst singing we've heard since the Just The Two Of Us fiasco - it feels flat and artificial. Chris Moyles will probably win by galvanising the millions of mouth-breathers who listen to his show, but we have to agree with this rant (make sure your pop-up blocker is turned on). And really, the last thing this country needs is more ex-soap 'stars' clogging up the charts, like chunks of talentless cholesterol in music's bloodstream.

Finally, returning to BB, we'd like to say how much we enjoyed Nikki et al attempting Klingon, and how adorable Pete looks in his geek-attire propellor cap. Is there any doubt that he'll win?