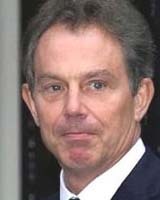 After the trouncing Labour took last Thursday in the local elections, Prime Minister Tony Blair was forced to have a cabinet re-shuffle sooner than expected. Some moves were expected. Ruth Kelly moving to a new department. Charles Clarke returning to the backbenches. Chief Whip Hilary Armstrong being demoted.

However, a lot of the new positions came as a surprise. Margaret Beckett promoted to Foreign Secretary, even after she presided over the Rural Payments Agency scandal. Patricia Hewitt NOT getting sacked from the Health Brief. John Prescott being stripped of his portfolio, but keeping his ministerial perks. Jack Straw and Geoff Hoon being demoted. Stephen Byers not making a comeback.

All in all, this is a cabinet re-shuffle that says "I'm staying Gordon, so piss off!" The Chancellor cannot be happy with his neighbour. Any thoughts of a "deal" between the two men over the British Premiership have now surely soured. Londonist feels that the whole thing smacks of Thatcher's tearful departure from No. 10 (tears of sadness for her, joy for the electorate). Blair won't relinquish power willingly, and with the self-proclaimed negotiator between Blair and Brown, Mr. Prescott, discredited, it looks like the only way Blair will go is if his hand is forced.