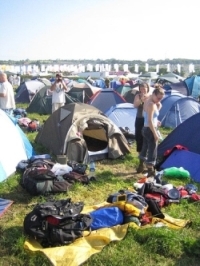 This week marks the start of the new Big Brother (Thur 9pm C4). We're fairly sure this will split our readership (hello, Mrs Trellis of North Wales) right down the middle; BB is a love-it-or-hate-it proposition. TV Troll hated it until undergoing a Damascene conversion last year, so we understand both sides of the relationship with Endemol's postmodern, controversial show. Those on the "it's a sign of the End Times" bandwagon will be utterly horrified by the thought that these idiots, yes, these grinning idiots right here will be looning it up and shagging (fingers crossed) and making complete tits of themselves on every TV screen in the country while their mindless antics are dissected by the broadsheets (in that everything-is-relative, we're down with the kids honest, ironic Pop Culture Studies style they deploy to divert accusations of dumbing down) and splashed across the tabloids ("BB HOUSEMATE GETS UP, HAS A DRINK OF WATER - EXCLUSIVE PICTURES") and we really, truly feel sorry for you, we do. As usual, the producers have promised that BB is going to be meaner than ever and oooh, just wait 'til you see what we have in store for the fame-hungry, soulless drones eager beavers this year and yada yada and golden tickets and urinal cameras and .. whatever, we don't care, just bring on the fresh meat and Davina doing what she does best and Noel Edmonds (?) and the rest. We're thrilled; welcome back!

The return of BB coincides with our other annual TV favourite: The Eurovision Song Contest 2006 (Sat 8pm BBC1). If only some way could be found to make Eurovision last as long as Big Brother we could die happy. Eurovision: camper than a man having sex with another man, substitute battlefield for just about everybody, progenitor of some of our fondest televisual memories - grannies banging drums, Guildo hat Euch lieb, Israelis falling over … It's a never-ending source of joy. Get in the spirit for your party (you are hosting/attending a party, aren't you? You weren't thinking of going out?! Die, heretic) by watching Boom Bang-A-Bang: 50 Years Of Eurovision (Tue 10.35pm BBC1) and Daz's Eurovision (Thur 10.45pm BBC3), not forgetting the Eurovision Song Contest Semi-Final 2006 (Thur 8pm BBC3), which last year was almost more fun than the main event itself - no small thanks to Austria's entry Y Así ("far beyond parody", said the Stuttgarter Zeitung, and we agree), which married the sound of the Buena Vista Social Club with the sound of yodelling, and was the Eurovision song par excellence, if you ask us - we were gutted when it didn't get through. Who to vote for, though? Oh, that's easy: Finland most definitely has our vote this year, unless it turns out that the German entry is Rammstein featuring Céline Dion covering Britney Spears while a French mime artist performs in the background and some Romanians wield angle-grinders. That's the only combination we can think of that might be better. Anyone know where we can buy some gravlax and Finlandia?

Alan Hollinghurst won the Booker prize in 2004 with The Line Of Beauty, which we haven't read (haven't got round to it yet - we've read a couple of other books by Hollinghurst, though, and thoroughly loved them) and now his story of aristocrats, buggery, Tories, love, social climbing and filthy riches is coming to the idiot box, in an adaptation by Andrew Davies, he of, most recently, Bleak House fame (The Line Of Beauty, Wed 9pm BBC1 - phew, it doesn't clash with Desperate Housewives, Wed 10pm C4). 'Highbrow' entertainment for sure, but we'll be watching it for the Jilly Cooper-esque moments as much as for the acting and directing, which are bound to be superb.

As for the rest of what's on this week, well, we'd really rather they didn't Bring Back … The A Team (Thur 10.15pm C4); it was of its time and, no matter what 80s-obsessed twenty-something man-boys will tell you, it wasn't all that great. Let it rest in peace and become a fond memory rather than a stinking zombie-like thing. Nostalgia isn't what it used to be, aha ha ha. We also take issue with the title of the 'documentary' Brad, Jen and Angelina: A Fatal Attraction (Wed 9pm Five, surprise surprise) since, as far as we're aware, Brad's falling for the beautiful Angelina and subsequent split from the rhinoplastied Jennifer (see Leprechaun for an example of her pre-nose job nose) hasn't caused any deaths. Near heart attacks caused by excesses of joy among the editorship of a certain kind of celebrity magazine maybe, but no actual fatalities. Someone call the ASA! If you weren't already suffering DVC fatigue, please, be our guest and tune in for The Da Vinci Detective (Sat 7pm C4), you masochist, you. Finally, someone (ahem, the BBC's Editor of Comedy, in fact) once described Funland (Sun 10.30pm BBC2) as "the bastard son of The League of Gentlemen and EastEnders after a heavy night on the town with Twin Peaks" which sounds good to us; indeed, the couple of episodes we caught when it was first aired on BBC3 were rather wonderful, and after its Bafta near-miss we might just commit to a full series. Oh, go on then. If you insist.