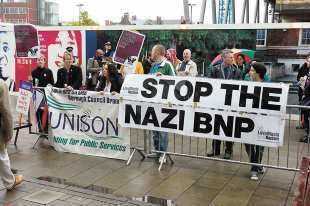 As they walked into their first full council meeting, a crowd of anti fascist protestors stood outside shouting at them. Once inside, the BNP group on the council had tabled an amendment to the council's constitution condemning discrimination against "the indigenous majority". As the amendment was read, laughter broke out in the chamber, as only one of the 11 BNP councillors raised their hand to vote for the amendment.

Apparently the meeting then got heated when Barnbrook claimed he had not received his copies of council documents until a couple of days before the meeting. He was told to sit down by the Chair, and other councillors claimed they all received theirs well in advance.

No doubt the BNP councillors did receive their papers in time, they just thought that they could open the envelope by pressing a buzzer.