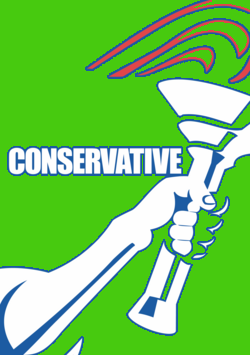 Dave the Chameleon was wearing his bright green hue today, as he told voters to "vote blue" to "go green". Cameron was running around Essex this morning, and he's off to Norway later this week to see what climate change is doing to glaciers. But the other parties are not impressed. Labour accused the Tory leader of offering "warm words" and the Lib Dems said he was "posturing".

However, Cmaeron's word, as part of a pamphlet released today, along with the installation of a wind turbine on the Tory leader's roof (much to his neighbours' annoyance, apparently). marks another step in the direction of Cameron's Compassionate Conservatives, and with the polls showing Labour ahead again, is a much-needed attempt to win over the middle-ground vote.

We will have to see what the voters have to say on May 4th.