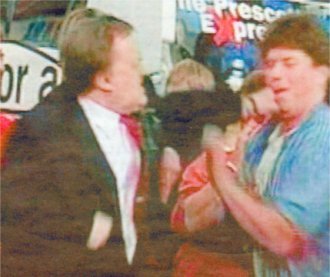 Oh yes, Deputy Prime Minister John Prescott today brutally attacked Tory leader David Cameron - but, unusually for the big fella, with words! Two Jags had quite a bout with Tory deputy leader William Hagueat Prime Minister's Questions a couple of weeks ago, and left Hague looking like Harry Enfield's Tory Boy. Prezza is still in fine form, as he attacked Cmaeron today, calling him "all talk and no action." He continued:

"I'm on to Cameron. And more importantly the British people are on to him, he's all talk and no action. All words and no substance. He's a political chameleon who changes his colour at will, but the political animal underneath is Conservative to the core."

Dave had better watch his back!

Where Have All The Donors Gone?

The latest list of new peers has been revealed by Number 10. But where have all the Labour donors/creditors gone? The list is made up mainly of defeated parliamentary candidates, who will be loyal to the Labour whip. It seems Blair is running scared when it comes to peerages. The Tories will, however, be facing fresh scrutiny as their peerages list still includes donors who have given the party almost £230,000.