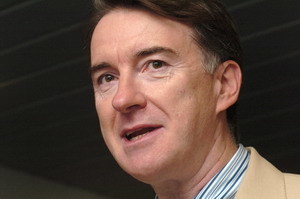 Blair's lapdog, and EU Trade Commissioner, Peter Mandelson, has called for the issue of the EU constitution to be revisited. The constitution, which received resounding No votes in both France and the Netherlands last year, is widely believed to be dead, but Mandy believes that the constitution is "a good basis" for EU reform.

So there is hope for the EU constitution yet. And what's more, if anyone can bring things back to life, Mandelson can - remember, this is the man who managed to kill his political career on three different occasions, yet STILL rise from the ashes on every occasion!

The Electoral Commission, the watchdog in charge of conducting the inquiry into the loans row, has suspended the investigation, because they are allowing the Met Police to get on with THEIR investigation into whether any laws were broken.

The Electoral Commission can potentially force parties to declare all their secret loans, and to put strong pressure on the Government to reform the way political parties are funded. Once the Police have finished their inquiry, the Commission's investigation will get back on track, with the possibility of reform quite a strong one.