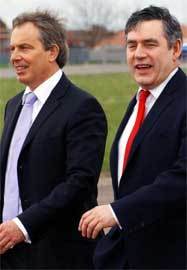 A misleading title really, as there is very little happening at Westminster for the next couple of weeks. The reason being that it is the Easter recess - M.P.s have all gone back to their constituencies for two weeks, so there is nothing happening in the Commons. Nevertheless, if a week is a long time in politics, the ensuing two week recess will still be eventful:

Blair Plays Down Rift With Brown

Shock news! Blair and Brown are at odds with each other again but the PM has played down the row, which is allegedly over whether the Chancellor will be on the platform for the upcoming launch of Labour's local election campaign. Apparently, the relationship between the two men had soured so much over the weekend that Blair decided that Brown would be dropped from the event.

Blair denounced the media reports, claiming that the story is "the soap opera of politics", and that "the important thing is to carry on doing things". Cabinet Ministers, on the other hand, implicitly told the press that there has indeed been a downturn in the relationship between the two men. Northern Ireland Secretary Peter Hain said:

Naughty Mr. Hain! You will be getting an angry phone call from Tony! The "soap opera" (which we shall call Neighbours) continues...

Lord Chancellor Gives In To Modernisation

The Lord Chancellor is the epitomy of what is wrong with the British political system - he is a member of all three branches of government, the executive, the legislature and the judiciary. These three branches SHOULD be separate and provide checks and balances on each other. However, the Lord Chancellor is appointed by the Prime Minister and is a member of the cabinet (executive), he has a vote in the House of Lords (legislature) and, until now, he was the country's most senior judge (judiciary). But now, the Lord Chief Justice, Lord Phillips of Worth Matravers, has taken over as head of the judiciary, heralding a big step forward in Labour's manifesto pledge of modernising the House of Lords. Londonist predicts the formation of a UK Supreme Court before long, which will be independent of the House of Lords (which is currently the UK's highest court of appeal). Watch this space.

Another scrap of evidence that the House of Lords is to be modernised soon: The Lord Chancellor has always enjoyed riverside quarters in Westminster, which the previous Lord Chancellor, Derry Irvine, had decorated with £300-a-roll wallpaper (Lords are too good for B&Q, apparently). It has now been decided, however, that the Lord Chancellor no longer needs his own quarters in the Palace of Westminster, and they are now to be converted into a number of function rooms, offices, meeting rooms and a staff canteen. Just don't spill any food on the walls!