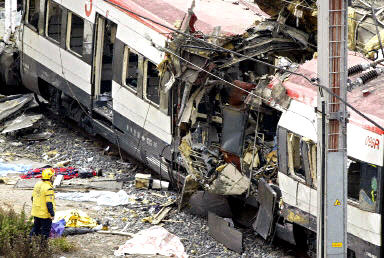 A worrying link has been made between the London and Madrid bombings by European security services - namely, that the perpetrators in both cases were not international al-Qaida terrorists, but home-grown radicals, who used the internet to plan their attacks.

When both bombings occurred, the media was immediately up in arms, claiming that al-Qaida was responsible, when in fact, in the case of the London bombings, all but one of the bombers were British-born. In addition, a Spanish judge who has been investigating the Madrid train bombing in 2004 which killed 191 people concluded his report yesterday by saying that the bombers were also born in the country which they bombed. The group of terrorists were inspired by, but not directed by al-Qaida.

In the case of London, the ringleader, Mohammed Sidique-Khan travelled to Pakistan prior to the bombings, where he apparently was radicalised and underwent al-Qaida training, but it was the medium of the internet that allowed him and his accomplices to make their bombs on a 'shoestring budget' and plan their attack.

This news has a profound effect on European security services, who had until now been looking outside their own country for a terrorist threat, but are now being forced to look inside their own borders. Of course, it is much harder to spot a threat coming from inside one's own country, as British-born citizens are not subjected to the checks that immigrants are.

The threat of the "made in Europe" terrorists is both widespread and imminent, and Londonist wonders whether it is really feasible to expect security forces to keep tabs on potential British-born terrorists without infringing on the human rights of other Britons.