Inner Worlds Outside at Whitechapel Gallery 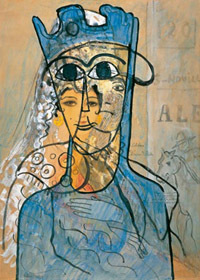 It’s not always easy to be different, even in the art world. The supposed creative freedom, the idea that artistic eccentrics are respected and perhaps even nurtured by the establishment is often an illusion - the community is driven by market forces, clearly defined trends, and a narrow scope of accepted forms by an even narrower assortment of bankable artists.

Which is why a new exhibition Inner Worlds Outside looks so compelling. Showcasing Outsider Art (which is not, as one might think, the work of an artist yet to be scooped up by Saatchi) it is an expression of the forgotten – psychiatric patients, prisoners, mediums - those at the very fringes of society who used a canvass to etch their inner mind.

The term Outsider Art was coined by art critic Roger Cardinal in 1972 as an English synonym for the French “Art Brut” (“raw art”) to describe art created outside the boundaries of official culture. Included in the Whitechapel exhibition are Henry Darger whose illustrations - maps, collaged photos and watercolours combine scenes from the US Civil war with monsters and nude women with male genitals, Madge Gill who was “guided” in her drawings by a spirit she called "Myrninerest", while Adolf Wölfli - the banner boy for O.A. - a psychiatric patient, left a legacy of intricate drawings and texts. Often with no training, limited technical knowledge and very few resources, their works were compelled by a deep expressive urge.

One of the true indicators of this “naïve” art is that is free from “professional ambition”, which makes it all the more ironic that the mainstream has looked to covet Outsider Art over the past few decades. Strange too that the curators have decided to team the works beside established artists like Joan Miró and Philip Guston, explaining this lack of confidence away because it illustrates the “impact of unknown Outsiders on some of the greatest artists of the 20th Century”. However, if you want unfiltered creativity and disturbing expressiveness, our money is definitely on the outsiders.