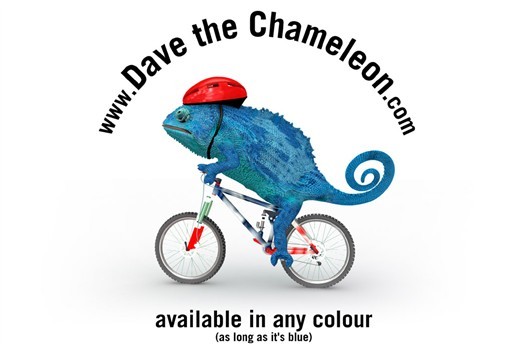 Those Labour lizard-junkies have come up with a second episode from Dave the Chameleon. You can watch it here. It's largely recycled material, but there is more new animation towards the end. Still amusing, but the fact that Tory M.P.s are now walking around wearing Dave the Chameleon badges, and "Chameleon" Cameron himself has vowed to put a picture of the animated lizard in his (wind-powered) kitchen) kind of takes the sting out of the whole thing.

Labour have also bought themselves a real chameleon, which you can watch live (Windows Media Player/Realplayer. Still, got to be better than Big Brother.

The good chaps at backingblair.co.uk have jumped on the bandwagon too, giving us a version of Dave the Chameleon - for dummies, complete with a cost counter (in peerages).

Who would have known that a lizard would capture so much media attention?